MUSICAL Mamma Mia! starring Meryl Streep and Pierce Brosnan has become the highest-grossing British film at the UK box office. The film, which features the songs of Abba, has taken Â£67.2m in the UK since its release in July.It is now the second highest-grossing film in the UK behind Titanic.
Harry Potter and the Philosopher’s Stone, which grossed Â£66.1m, was the previous holder of the record of the British record.
Mamma Mia! could be on its way to beating Titanic’s box office haul of Â£69m as cinema-goers continue to flock to see it. 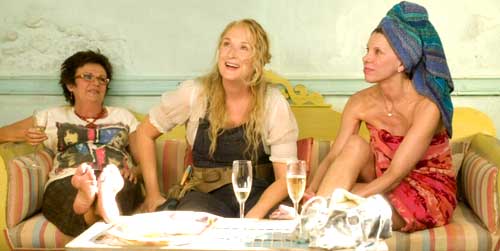 Now in its 16th week of release in the UK, the film has also become the number one film of the year in 13 countries including Germany, New Zealand, South Africa and Sweden.
Sing-along versions of the film in cinemas have also helped boost the film’s success.
David Kosse, president of Universal Pictures International told industry paper Screen International said: “What is interesting is the speed at which it has gotten to this level.
“We are ahead of Harry Potter and continue to be ahead of Titanic at this stage, and we think it still has some life in it.
“One driver is the multiple viewings with people going back to see it again and again. It really is happening on a scale that we haven’t seen before.”
The three women who created the worldwide stage hit – producer Judy Craymer, writer Catherine Johnson and director Phyllida Lloyd, repeated their roles in bringing the musical to the big screen in the British/US collaboration with Universal Pictures.
The rest of the top 10 highest-grossing British films in the UK is completed by the Harry Potter and Bridget Jones franchises, comedy The Full Monty and romantic comedy Love Actually.