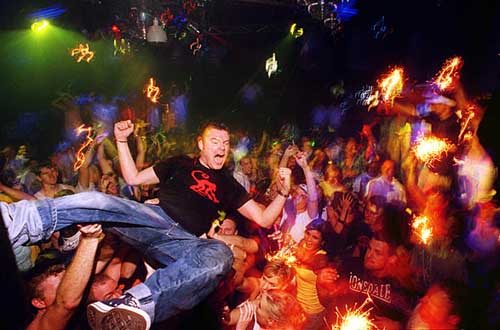 Former Ultra-Sonic and Public Domain frontman Mallorca Lee and Arena legend Robbie Nelson (Agnelli & Nelson) take control of LOVE Fridays for a night that promises to be jam-packed with adrenaline and high-octane performances.

After touring the world with Ultra-Sonic throughout the 90s and winning chart success with Public Domain and The Warp Brothers amongst others, Lee is now excelling as a solo artist.

During his illustrious career he can lay claim to over seven artist albums and over four million record sales worldwide.

And over the years he has become famed for his energetic, if not sometimes crazy, antics;

“I believe it’s all about unpretentious entertainment,” he says.

“I’m booked to make em’ dance and for me the way you put yourself across is just as important as the music you play.

“People can see I love what I do and that I want to be there. I hate watching a DJ who looks like he can’t be ***** being there or can’t wait to leave the club,” he explains.

And just what does he get up to while on stage?

“Does putting a guitar through the sound system, stage diving into 250,000 people, smashing up every keyboard on stage, pulling down light rigs, climbing up them, jumping into a swimming pool mid set, loosing my shoes or throwing the CDJ’s into the crowd count?” he laughs when asked that question!

“These things are never pre-meditated, it just happens when I am sucked up in the moment and sharing it with amazing crowds,” he continues.

And that unpredictability, yet honest love for what he does, is what makes Lee one of the most likeable and entertaining artists on the circuit today.

Robbie Nelson performed memorable sets across Northern Ireland right throughout the 90s and his residency at The Arena in Armagh has went down in Northern Ireland clubbing history as one of the greatest of all time.

When he joined forces with Chris Agnelli towards the end of the decade the country’s most successful ever production duo (Agnelli & Nelson) was created.

‘El Nino’, ‘Hudson Street’, ‘Everyday’, ‘Holding Onto Nothing’ and ‘Wear That Dress’ are just some of the iconic productions released by the Larne DJs/producers.

International gigs have taken them across the planet, playing countries as far afield as Argentina, China, Taiwan, Korea and Singapore.

Now presenting a weekly radio show (Solaris International), having just returned from a tour of Australia with Trance Energy and with a new mix/compilation CD (Trance World 7) set for release Nelson is enjoying his music today every bit as much as he did in The Arena all those years ago.