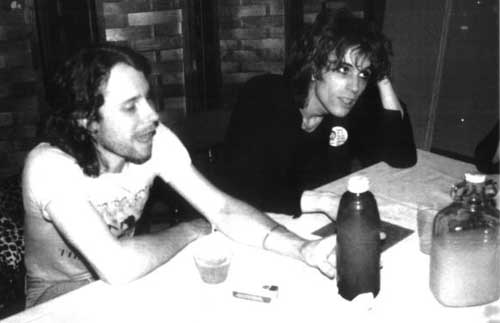 The Only Ones were a rare example of that magical ‘thing’ that bands sometimes possess, which encapsulates the whole myth and legend of Rockâ€™nâ€™Roll. They are back with their original line-up for one night only at The Village next April 5th. Tickets are â‚¬33.60 on sale Monday October 22nd @ 9am through Ticketmaster and other usual outlets nationwide.

There appeal owed a lot to the charismatic lead singer/songwriter/rhythm guitarist, Peter Perrett, whose innate decadence and hedonistic nature propelled The Only Ones into a sublime area of rock music that the media find potentially dangerous and curiously fascinating.
Peter’s songs, combined with his beautifully laconic, languid vocal delivery and John Perry’s Hendrix meets West Coast guitar lines were like a breath of fresh air to a Punk Rock scene that was fast imploding through its general lack of musicianship, and naivetÃ©/immaturity. The powerful rhythm section is driven by rock solid drummer Mike Kellie and stylish/melodic bass player Alan Mair.

The Only Ones recorded three superb albums for CBS. Their single ‘Another
Girl Another Planet’ is probably the bands most defining moment â€œA pure
adrenaline rush of a pop songâ€ wrote Andy Blade.
The Only Ones have continued to inspire the fiercest devotion in every corner of the planet and have been hugely influential on the alternative rock scene ever since. These are the Only Ones, back in their original line up.

The Only Ones Live @ The Village next April 5th. Tickets are â‚¬33.60 on sale Monday October 22nd @ 9am through Ticketmaster and other usual outlets nationwide. Booking Line: 0818 719 390.
www.aikenpromotions.com
myspace.com/jimmythesaintminneapolis