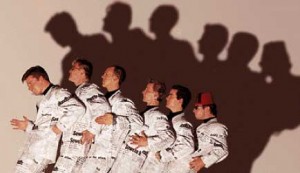 MADNESS continue a phenomenal year with The Liberty Of Norton Folgate Tour this December. This is the first tour for the album that saw the band reclaim their rightful place at the peak of Britainâ€™s pop hierarchy with a return to the UK Albums Top 5 and a host of critical appreciation for â€˜a work of great craft and charmâ€™ (Evening Standard).

Their performance at Glastonbury drew massive crowds for a set that reminded everyone of a catalogue crammed with some of the greatest moments in pop music, Julyâ€™s Madstock was a highlight of the London festival season and throughout the summer the band have toured Europe playing festival sets to massive crowds. When Oasis split at the Rock An Seine Festival last week it was Madness that the promoters turned to in order to keep the crowd happy. Needless to say the band delivered.

Prior to the December tour dates, Madness release two albums. The first, â€˜Total Madnessâ€™, a comprehensive compilation of their finest moments through three decades of pop, is out on this week (released 21 September) with a second disc featuring the classic music videos whilst October 26 sees a very special re-issue of the bandâ€™s debut â€˜One Step Beyondâ€™ with a second disc of rare and unreleased tracks from the bandâ€™s formative years and the album era.
www.myspace.com/madnessofficial
MADNESS
Odyssey Arena
29 December 2009
Tickets are Â£36.50 and go on sale Friday 2 October at 9am
Available from:-
Odyssey Arena Box Office 9073 9074
All usual Ticketmaster outlets.
24hr Credit Card Bookings 0870 2434455
Book on line www.ticketmaster.ie