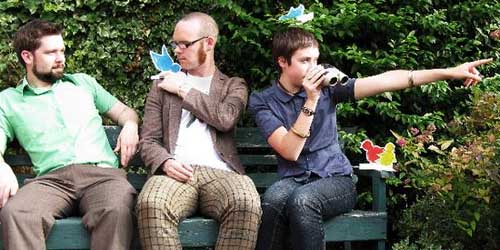 In 2008, Cutaways, an synth-driven indie-pop trio from Belfast, released the Start Stop! Start Stop! EP. After receiving airplay from Colin Murray on national Radio 1 and rave reviews from the likes of Artrocker magazine the Cutaways took their vibrant live show all across Ireland, as well as London, Glasgow and Liverpool with the gigs featuring anything from impromptu puppet shows to ‘rap’ cameos. The bandâ€™s puppet counterparts also starred in the video for Lovers Are Lunatics; and Blue Bird, Yellow Bird and Red Bird from the EP’s artwork sprung to life terrorizing the streets of Belfast in the video for I Don’t Understand What You Don’t Say. The year also saw Cutaways record a very special BBC Radio 1 session, and with the bandsâ€™ name being appearing on bills right across the proivince, they finished the year on a high playing to a ‘capacity’ crowd in a one-bedroom flat on New Yearâ€™s Eve.

As 2009 rolled in, Cutaways knew it was going to be a promising year from the word go. With Ireland’s Hot Press and AU magazines both naming Cutaways as one of the bands to watch in 2009;they certainly lived up to everyoneâ€™s expectation and in March the band made their first TV appearance with a stunning performance on regional ITV1â€™s UTVâ€™ Live at The Limelightâ€™

Their 11-track debut album Earth and Earthly Things is a superb introduction to the delirious and dizzying world of Cutaways; merging infectious indie pop-rock with pounding synth soundscapes and boy/girl harmonies.