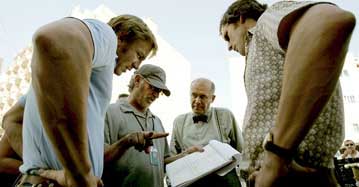 By Andrea Clarke
LOW budget Irish film, Once is making waves in the US and caught the eye of legendary Hollywood director Steven Spielberg.
The Saving Private Ryan director is enamoured by the movie, which cost a mere $150,000 to make.
After seeing it he said: â€œA little movie called Once gave me enough inspiration to last the rest of the yearâ€.
Once is only playing in 140 theatres across the US but has made $6.5 million at the box office and scooped the World Cinema Audience Award (drama) at the 2007 Sundance Film Festival.
Written and directed by John Carney, Once is a contemporary musical set on the streets of Dublin, featuring Glen Hansard and his Irish band The Frames.
The film tells the story of a busker (Hansard) and a Czech immigrant, played by musician Marketa Irglova, during an eventful week as they write, rehearse and record songs that reveal their unique love story.
Director, Carney said: â€œIt was an attempt to make a film that was naturalistic and on the streets, quite gritty and low-key, yet would have all these songs in their entirety in it.
“How do you do that? You set up a world where people are singing to each other and moving through a musical landscape together. So I came up with the idea of a street busker and an immigrant, with things like her playing in a piano shop because she can’t afford a piano, writing lyrics, rehearsing together because they’re recording a demoâ€.
According to USA Today, the filmâ€™s backers Fox Searchlight are so impressed with its success theyâ€™ve decided to give it an extra push by sending stars Glen Hansard and Marketa Irglova on a Stateside musical tour.