NEW Xbox game is set to make you a star this Christmas. Youâ€™re in the Movies will hit European store shelves on November 28 premiering exclusively on Xbox 360 just in time for Christmas. Youâ€™re in the Movies combines cool with kitsch as you live out your dreams of becoming a scream queen, zombie or kung fu master.The game transports players into a magical world of cinema and hilarious improvisations.
Using the Xbox LIVE Vision camera, playersâ€™ minigame actions can be captured and placed into short, riotous films that put the spotlight on the unique and often dubious acting talents of friends and family. 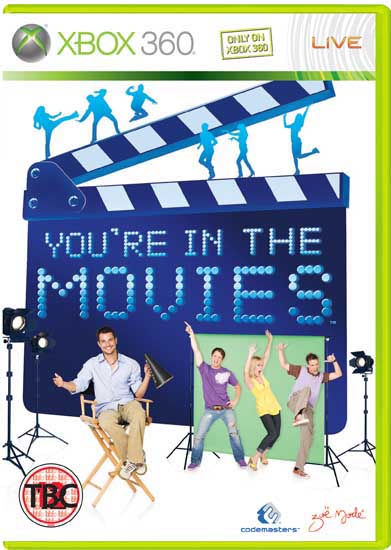 Performances never end up on the cutting room floor and are never the same – with â€œYouâ€™re in the Movies,â€ youâ€™re about to be a star, if only straight to DVD.
Up to four friends can bask in the spotlight and play starring roles. A top-notch director guides actors through their roles with simple instructions and immediate feedback, in fact, the director even rates actors on their physical performance in mini games.
Or jump into Director Mode and produce your very own blockbuster. Lock yourself in the edit room and get to work filming the next big hit. Choose your music, add your own voice-over and re-edit to your heartâ€™s content.
You can even share your cinematic creations on Xbox LIVE, sharing your masterpieces with friends, family and the entire world.
And Xbox 360 has revealed screen legend Burt Reynolds will front a series of TV and magazine advertising spots for the new title.
The commercials will feature Reynolds using his long and illustrious career as a part of the tinsel town A-list, starring in more than 90 feature films to date, to show would be leading men and women how to become stars by transforming their living rooms into Hollywood studios, capturing the attention and participation of family and friends.
Burt Reynolds said â€œItâ€™s great to be able to share some of my experience with everyone about what it takes to be a movie star.
â€œYouâ€™re in the Movies on Xbox 360 allows everyone to have a piece of the action and have a fun time with their friends and family, staring in their own features, from the comfort of their own homes.â€
The TV campaign breaks in major European markets this November.
Youâ€™re in the Movies is another great part of the Xbox 360 story as it continues to build on the universally captivating entertainment on offer, including the widely anticipated LIPS and Scene It? Box Office Smash – as well as the great movies, music and community channels on Xbox LIVE.You’re in The Movies recommended retail price Â£29.99 or Â£44.99 bundled with an Xbox LIVEÂ® Vision camera.
For more information please visitxbox.com