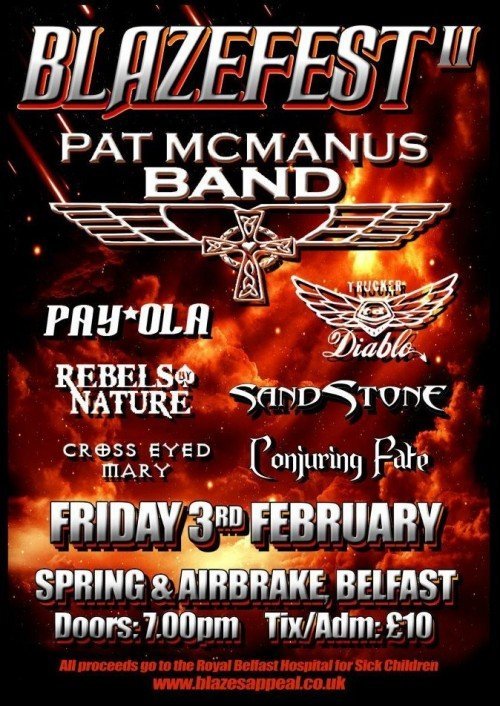 Friday 3 February saw local music venue, Spring & Airbreak, Belfast, transformed into a nucleus of rock ‘n’ roll and a whole lot of fun, all for a good cause.

The musical event, Blazefest II, was established by Darren and Dawn Shields-Pettitt, on behalf of blazesappeal.co.uk.

This website was set up to raise money for the Royal Belfast Hospital for sick children, as a gesture of appreciation for saving their son Blaze’s life.

It was excellent to see so many local bands ready and willing to support such a great cause.

All seven bands put on a fantastic show, my personal favourites of the evening being opening act Cross Eyed Mary, Sandstone, and Pat McManus Band.

It’s no easy job being the opening act of a gig, particularly as the show starts early in the evening, and people are still filtering into the venue.

Despite a couple of sound glitches, I felt that Cross Eyed Mary put on an energetic and entertaining set, and judging by the reaction at the end of “Screamt”, I don’t think I was the only one who thought this.

Sandstone, who I had never seen live, have definitely gained a new fan in me.

With an already strong established fan base, Sandstone illustrated just why so many people followed them, with a professional yet very smooth performance.

And Pat McManus band, what needs to be said?

All I’m saying is that it was easy to see why these guys were given the headlining spot, ending this charitable event on a high.

All in all, a good night was had by all, excluding the sore head some of us may have been nursing the next day.

A lot of money was raised for this worthy cause, and all being well, donations will continue to flood in.

If anyone wishes to make a donation or become involved in any way, visit blazesappeal.co.uk for more information.
By Livy Kerr