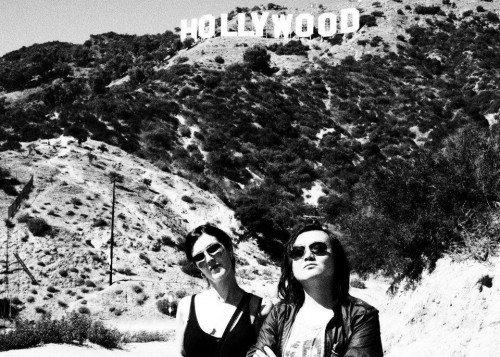 Deathline – Jennie Werlemar (Vocals/Bass) and Kaoru Sato (Guitar/Programming): a visceral blend of dirty electronica, throbbing garage rock and post-punk prowess make Deathline a formidable beast.
The darkly textured mix includes heavy psych, shoegaze and kraut sensibilities with added elements of industrial influences along with Swedish born Jennie’s husky and nonchalant vocal delivery gave way to the press labeling this duo as “Rock Noir” drawing comparisons to Jesus and Mary Chain, Suicide and The Raveonettes with the beguiling front-woman being called a “punk rock Nico”
After the self-released debut album Sixty-Nine in early 2009 they threw themselves into the live circuit playing shows across the UK and Europe and hit the road for short tours of the US along the East Coast and Midwest before retreating back into the studio to pursue a darker and heavier path which led them to recoding new material with Josiah Mazzaschi (whose credits include Smashing Pumpkins/Built to Spill/Rilo Kiley).
Deathline new single ‘Ten of Clubs’
Released on Monday 7th May 2012
facebook.com/theDeathline