Appearing in LEGO Rock Band as minifigures, LEGO-fied front man Freddie Mercury, guitarist Brian May, bassist John Deacon and drummer Roger Taylor will be seen jamming to their hit anthems â€œWe Will Rock Youâ€ and â€œWe Are The Champions.â€

The real Queen guitarist Brian May had this to say: â€œThis is IT! I wanna play! When do I get my toy LEGO man?â€

Today also marks the release of the Queen pack for the Rock Band Music Store of downloadable content, featuring 10 of the bandâ€™s most loved songs including â€œKiller Queen,â€ â€œSomebody to Love,â€ â€œFat Bottomed Girlsâ€ and the Queen/David Bowie collaboration, â€œUnder Pressure.â€ In addition, Queen will release Absolute Greatest on Nov. 17, featuring 20 of the bandâ€™s biggest hits. 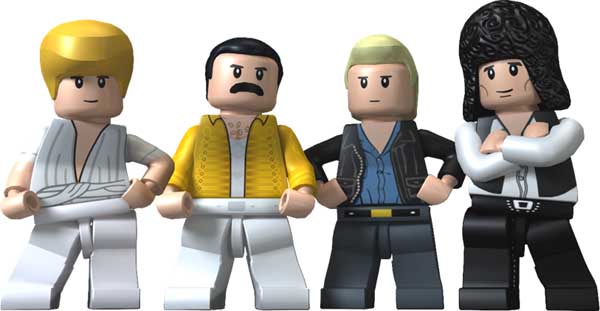 LEGO Rock Band is the family friendly music action game with an unmatched collection of rock and pop hits â€“ no obscure heavy metal in this game! With new Super-Easy mode for younger players, LEGO Rock Band works with existing Guitar Hero and Rock Band peripherals and features all the customisation, humour and building you’d expect from the award winning LEGO game franchise.

Released on Sony PS3, Microsoft Xbox 360, Nintendo Wii & DS, itâ€™ll hit retailers shelves in late November 2009 and is sure to be a massive hit with the whole family.