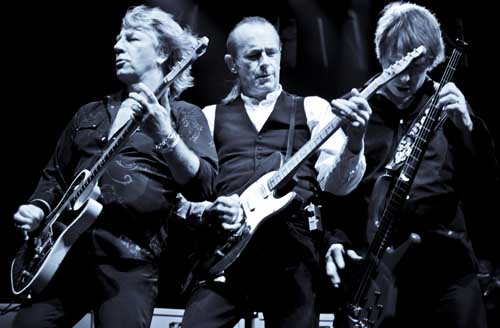 The legendary Status Quo have confirmed an Irish Tour February 2009.

As part of the tour, Status Quo play The Waterfront Hall. Tickets, £36, are on sale now. It is estimated that Status Quo have played over 6000 live shows to a total audience in excess of 25 million people. In doing so, the band have traveled some four million miles and spent over 23 years on the road.

When you talk about the legends of British rock the name Status Quo is always on the list. The Quo are your archetypal English rock band and join an elite group of artists who have continued to thrill audiences since the 60′.

They are one of the most successful bands in British history after the Beatles and The Rolling Stones. From the late-60’s to the mid-80s they had a string of hits, including ‘Down, Down’, Roll Over Lay Down, ‘Again and Again’, ‘What You’re Proposing’ – all timeless rock anthems.
This is a special tour for a truly unique band. Don’t miss out.
Over 18 show. I.d Required
Status Quo – Irish Tour
February 2009
1 INEC, Killarney, Co. Kerry
3 Heritage Hotel, Portlaoise
4 Waterfront, Belfast
7 Royal Theatre, Castlebar
8 The Olympia Theatre, Dublin
mcd.ie
statusquo.co.uk
ticketmaster.ie