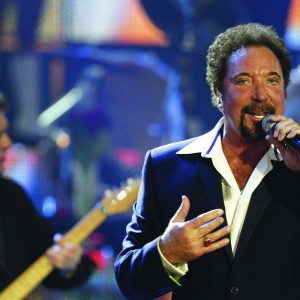 Tom is a living legend who has befriended, collaborated and hung out with practically every key character in the music and showbiz worlds; he has the rare ability to cut across generations and genres, appealing to young and old, mainstream and cutting edge alike. One of the great performers of both the 20th and 21st centuries, heâ€™s widely recognized as one of the godfathers of modern soul, a man without whom the likes of Amy Winehouse and Mark Ronson, Joss Stone and Duffy would never have existed.

Incredibly, after making music for 45 years, it has been suggested by critics on both sides of the Atlantic that his latest album 24 Hours might just be his best yet. Recently certified Gold, it is a collection of largely original songs that Tom has co-written, containing some of the most personal and revealing work in his 5 decade long career.

Tom will be making a special appearance on The Tonight Show with Jay Leno on May 21, as Jay finishes his tenure as host this month.
tomjones.com
Tom Jones
Live at the O2, Dublin 26th October â€˜09
Live at the Odyssey arena, Belfast 27th October â€˜09
Tickets will go on sale this Thurs 14th May at 9am