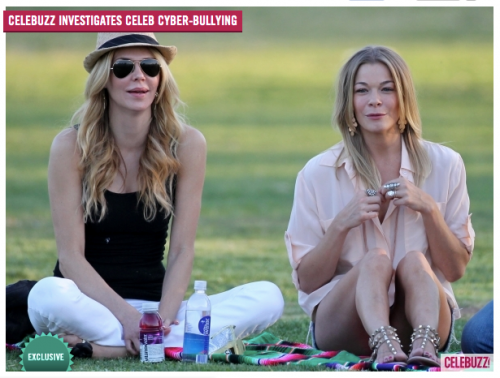 Before LeAnn Rimes packed her bags for a 30-day inpatient facility to combat anxiety and stress, she was (and apparently still is) embroiled in a behind-the-scenes back and forth that appears to be draining her emotionally.

Celebuzz reports that Rimes has accumulated a glut of offensive Tweets published about her, circulated among a circle of private individuals, and is preparing papers with her legal team in efforts to obtain criminal and civil penalties.

“There has been this cyber-bullying that has been going on for a considerable period of time,” her lawyer Larry Stein told Celebuzz, in an exclusive interview.

“Apparently, most of this started when LeAnn started dating Eddie Cibrian … These women [on Twitter] have been merciless — vitriolic in their attacks. Like most celebrities, Rimes didn’t like it, but she hoped things would get better.

“They don’t understand who she is or who she stands for.”

The fans have Twitter handles such as @8Smileys, @eileenyover, @calimommy09, @bree_sees_bs — or as one member referred to them, the “Brandi Bunch.”

Some of the Tweeters, while having private accounts, announce themselves in 160-character Twitter bios as “Team Brandi.”

There is the @blockedbyleann Twitter page — which calls itself the “official #blockedbyleann fan club” tracking Rimes “imminent meltdown.”

And, there is the Curious Case of LeAnn Rimes blog, with the URL address of “lunaticleannrimes.”
READ MORE IN CELEBUZZ.COM