First Light Movies, the leading nationwide initiative that enables young people from all backgrounds to realise their creative potential via filmmaking through UK Film Council funding, is thrilled to announce that its dynamic youth-facing website firstlightmovies.com has won a prestigious international Webby Award.


A total of 26 awards from 115 categories went to UK online projects and First Light Movies sits in the â€œOscarsÂ® for the Internetâ€ hall of fame next to the BBC World Service and the Financial Times.

The site, which was designed and built by Birmingham-based company 3Form (3form.net )was nominated in the Student category of the 12th Annual Webby Awards in the Online Film and Video section. 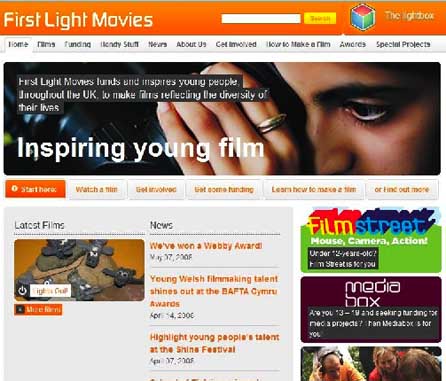 First Light Movies places young people at the heart of the creative film making process, which is reflected in the siteâ€™s Lightbox, a unique online blogging area for First Light Movies funded filmmakers, and the online cinema page which screens up to eight short films made by young people. As a result of the availability of new technology the website has harnessed the young peopleâ€™s creativity and broadcast films, made by children as young as 5-years-old, to the world.

This is an unparalleled honour. With nearly 10,000 entries from over 60 countries around the world, this yearâ€™s Webby Awards is the biggest in the competitionâ€™s history and continues to be the leading international award celebrating excellence on the Internet. Winners are selected because they are the cutting edge of original online film and video content.

The multi award-winning creative design company 3form was established in 1998 with the aim of producing high quality web sites, graphic design and software. Since then they have produced a number of highly successful projects for a wide range of clients, including Vivienne Westwood, Channel 4 and The Victoria and Albert Museum. 3Formâ€™s various awards include the Birmingham Creative City Award for Outstanding Innovation 2006, Best Independent Blog at the Guardian Innovation Awards 2008 and were named a British Council Digital Pioneer in 2007. 3form also designed two other sites that have achieved Official Honouree status at this yearâ€™s Webbys.

Not content with its one Webby win First Light Movies is also delighted that its website filmstreet.co.uk , aimed at engaging primary-aged children, their teachers and parents with filmmaking has also been named as an â€œOfficial Webby Honoreeâ€. With less than 15% of the 10,000 entries submitted to the awards gaining Official Honoree status this distinction is really worth celebrating.

Pip Eldridge, First Light Moviesâ€™ CEO, said of the good news, â€œWe are so pleased that First Light Moviesâ€™ website and Film Street have been recognized by such a prestigious international award. At First Light Movies we pride ourselves in placing young people at the core of all we do, especially our websites, and these acknowledgements are testament to the success of our online communication campaigns.â€

The Webby Awards is the leading international award honouring excellence on the Internet. The Webbys are presented by The International Academy of Digital Arts and Sciences iadas.net,a 550-member body of leading Web experts, business figures, luminaries, visionaries, writers, editors and creative celebrities.

The First Light Movies website will be honored at the Webby Film & Video Awards on 9 June at Skirball Center for the Performing Arts in New York!
Stefan Lewandowski, the founder of 3Form said of the win, â€œWhen we found out we had been shortlisted amongst websites that were created for much older students, we thought we wouldn’t have a chance. Many of them were at university and running their own TV stations! I can only imagine the judging panel saw the value in the project working with a wide age-range.”
firstlightmovies.com