Laura Marling has announced her return to Belfast on Wednesday 2nd July for a date upstairs in Auntie Annies. Laura Marling is a young small town girl. She began playing the guitar at the age of five, first being taught the blues by her father in front of the family fire, and has been in thrall to the songs and lyrics of the likes of Neil Young, Bob Dylan, Judde Sille and Joni Mitchell ever since.

But itâ€™s not just the â€œgolden-oldiesâ€ that Laura admires; contemporary artists such as Vetiver, Bonnie Prince Billy, The Microphones and Diane Cluck rank highly in her current listening favourites. 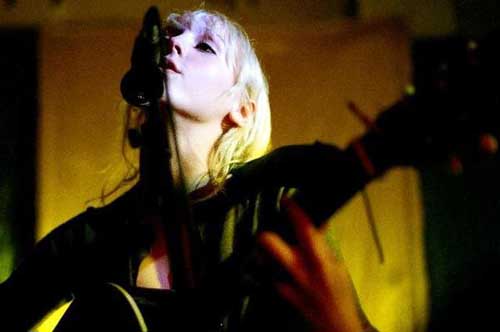 Following her highly acclaimed second EP, â€˜My Manic & Iâ€™, Laura Marling released her much anticipated debut album â€˜Alas I Cannot Swimâ€™ in February. â€˜Alas I Cannot Swimâ€™ is the culmination of what has been a prolific year of songwriting and creative maturity for Laura, from her debut EP, â€˜The London Town EPâ€™, released through Way Out West, to recent EP â€˜My Manic & Iâ€™, which saw her compared to a range of iconic female artists; Joni Mitchell, Sandy Denny, Kate Bush and PJ Harvey.

Alas I Cannot Swimâ€™ was released in a limited one-off beautifully printed Song Box designed inside and out by Laura with her wood-cut artist collaborator Andrew Mockett, offering a keepsake for her fans in which to keep their music and other mementos. It contains a CD copy of the album, and mementos relating to each song on the album.
lauramarling.com
myspace.com/lauramarling
LAURA MARLING
WEDNESDAY 2nd JULY
AUNTIE ANNIES
Doors 9pm Tickets: Â£8.00
Tickets on sale from Katy Dalyâ€™s, Zavvi & all usual Ticketmaster outlets. Credit card bookings & info: 0870 2434455 or book online at geturticket.com / ticketmaster.ie