Was that a flying hormone ? Yep ! It means Last Known Addiction are in the room…… 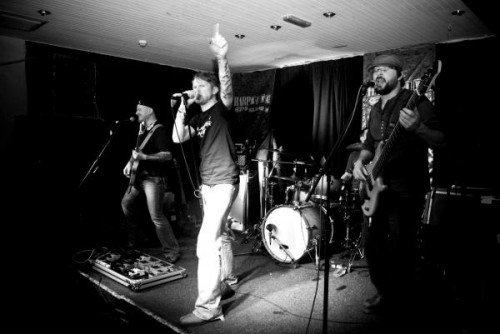 While the lovely Adele swoons over the guitarist, I decide it’s time to get serious and start actually reviewing – thought I was writing for Cosmo for a minute.

I can’t put my finger on it but there’s a real full sound to these guys like when you’re standing in a train station and you get that heavy rush of adrenaline as the train passes – these boys keep that going throughout their set.

The only break from this is when one of Andy’s many guitars scream out an incredible solo directed by the man himself.

I really like it when the whole band can contribute to the vocals as it brings a much bigger dimension to the backing and a special note goes to Ryan, the only singing drummer I’ve ever seen in a local band to do the obvious and wear a headset – saves him scrambling around for the mic as he’s smashing away on his kit.

Despite having only seen these guys once before when they played a couple of songs at a charity Battle of the Bands I find myself singing along to a couple of their songs including Around The World which in my opinion is a massive hit – clearly I have been exposed to Last Known Addiction’s music more than I realised, which is a great sign because it shows they know exactly how to construct a great catchy rock tune.

Frontman Stephen has probably the most tuneful rock scream I’ve only ever heard in stadium bands – certainly not that I can think of on our local scene.

A nice bass solo introduces the newest member of LKA – Dave, he fits in perfectly and looks like he’s been in the band from the beginning.

So all that’s left for me to do is enjoy the rest of the set and remind you that there’s a new album out just after Valentine’s Day 2011.

And for the girls hoping to get up close and personal – hands off, these men are taken……..however, doesn’t stop us window shopping ? Eh ?
www.myspace.com/lastknownaddiction
By Tina Calder