In case you missed any of the action, here is a sampling of some notable quotes from the 53rd Annual GRAMMY Awards week: 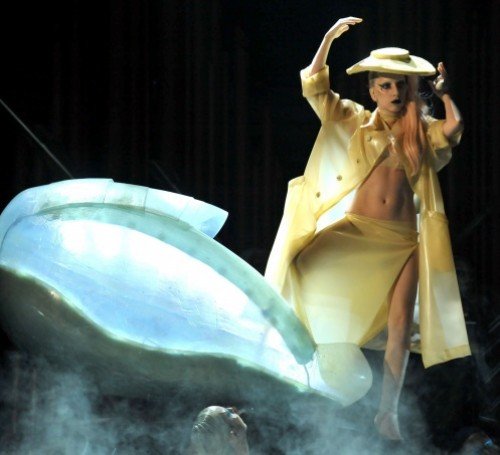 “I need to say thank you tonight to Whitney Houston. I wanted to thank Whitney because when I wrote ‘Born This Way,’ I imagined she was singing it because I wasn’t secure enough in myself to imagine I was a superstar.” â€” Lady Gaga after accepting Best Pop Vocal Album for The Fame Monster.

“I’m pretty much a hypocrite because I’ve been throwing abuse and other various objects at the screens of various functions like the GRAMMYs and the Golden Globes and the Oscars.” â€” Jeff Beck, who won three GRAMMYs Sunday night, in a Reuters interview before the show.

“It’s weird because I feel like we’re not necessarily a singing group. We just do it for television, so to be recognized as a group…it’s just really weird. I guess we weren’t really expecting it being on a TV show.” â€” Amber Riley, who stars as divalike glee club member Mercedes Jones in “Glee.”

“Yes! But it’s a privilege. I have to give it all the feeling I have. I grew up with these songs, and I love singing with other singers, especially such accomplished women.” â€” Florence Welch on whether itâ€™s daunting to take part in the GRAMMY tribute to Aretha Franklin.

“Bronchitis and laryngitis boo! I’m still goin’ to rehearsals tho! Sunday is everything.” â€” Rihanna, tweeting about her illness before the GRAMMYs.

“I don’t like to get political, but I have always loved her politics.” â€” Comedian Bill Maher on honoree Barbra Streisand at the MusiCares Person of the Year gala on Feb. 11.

“I wanted to be surprised. I didn’t know who would be there.” â€” Barbra Streisand, who didn’t supply a wish list of performers for Friday’s gala honoring her as MusiCares Person of the Year.

“My niece recently watched a DVD of Funny Girl for the first time and asked why I was singing songs from ‘Glee.'” â€” Barbra Streisand at the MusiCares Person of the Year gala.

“I was told Clive [Davis] thinks I’m the best new artist this year, and that means a lot to me. I’m going to bring the future to my performance.” â€” Janelle MonÃ¡e at the Pre-GRAMMY Gala on Feb. 12.

“I ate a lot ofâ€¦fried chicken over the holidays. So, I’m cutting back on that a little bit, but man, it’s going to be hard to curb the drinking. There’s too much celebrating. So, I won’t be backing down on that at all.” â€” Lady Antebellum’s Charles Kelley.

“B.B. King once said ‘You can’t serve two masters,’ and to me, that means you have to decide if music is something that expresses that inner voice and the divine connection that is music, or [is] something created to meet other people’s expectations. I’ve chosen the path of serving that muse. But as long as people keep inviting me to events like [the GRAMMYs], I’ll keep coming.” â€” Esperanza Spalding.

“This is my first GRAMMY for music, and it’s appreciated greatly.” â€” Neil Young at the GRAMMY Pre-Telecast Ceremony.

“It’s one of Aretha’s most popular songs, and I feel extra special to be able to do it for her. It fits me all around, vocally and the attitude and sass.” â€” Jennifer Hudson on singing Aretha Franklin’s “Respect” on the GRAMMYs in tribute to the Queen of Soul.

“This past Monday I had the pleasure of having sex with her, on TV no less. It left me exhausted, aroused and more than a little confused.” â€” Neil Patrick Harris introducing Katy Perry on the GRAMMYs.

“I especially want to thank all of you who took the time to send me ‘Get well’ cards and flowers. And most importantly, your prayers during my time of hospitalization. I wish I could be with you tonight, but since I couldn’t…next year, Okay?” â€” Aretha Franklin in a taped message on the GRAMMYs.

“We’re going to go play another song because we like music. Thank you to the GRAMMYs. Thank you everyone. We’re so happy.” â€” Arcade Fire frontman Win Butler after the group’s Album Of The Year win.

“Gaga is in incubation.” â€” The singer’s stylist Nicola Formichetti tweeting about Lady Gaga’s arrival at the GRAMMYs in an egg.

“That is the hottest cane I’ve ever seen in my entire life.” â€” Ryan Seacrest to Katy Perry’s grandmother, whose cane was blinged out by Armani.

“I should have thanked my wife instead of Howard Stern because I’m probably in a lot of trouble.” â€” Train frontman Patrick Monahan backstage after accepting the award for Best Pop Performance By A Duo Or Group With Vocals.

“We never expected we’d even get invited after we were nominated.” â€” Patrick Carney of the Black Keys, who won for Best Alternative Music Album and Best Rock Performance By A Duo Or Group With Vocals.

“Right before it went to No. 1, he asked if he could have it back but it was a little too late.” â€” Miranda Lambert after winning Best Female Country Vocal Performance for “The House That Built Me,” which was originally pitched to Lambert’s fiancÃ©, Blake Shelton.

“Oh my gosh, we were so stunned we started walking the wrong direction.” â€” Hillary Scott of Lady Antebellum as she accepted the group’s third GRAMMY Sunday.
www.grammy.com