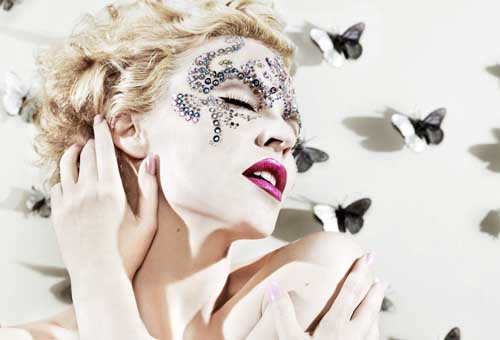 POP princess Kylie Minogue will release her new single in November – her first since beating breast cancer.
The Australian singerâ€™s electro-pop ballad 2 Hearts is out on November 12, preceded by the digital release on November 5.
The single is the first taster from her new album, which will be released later in the same month.
2 Hearts was written and produced by London based electro four piece Kish Mauve.
The star, who was diagnosed with breast cancer in 2005, worked with the Scissor Sisters, Groove Armada, Calvin Harris, Boy George and Stuart Price on her new album, Kylie X.
The Sunâ€™s Victoria Newton recently said: â€œIt is a surefire No. 1, a classic Kylie song you wonâ€™t stop humming. Expect her to hit No. 1 in both charts when the single and album are released in Novemberâ€.
kylie.com