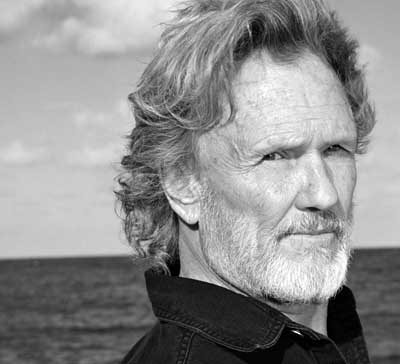 Kris Kristofferson has always identified himself first and foremost as a writer, and true writers know that what works best is giving a piece of themselves to the listener. With his latest album, This Old Road, Kristofferson lays a chunk of his own soul on every track. This beautifully sparse recording, produced by Don Was (Bob Dylan, The Rolling Stones), puts an emphasis on his fine lyrics and distinctive voice by featuring Kristofferson, his guitar, and harmonica. Subtle accompaniment is added by Was (bass, piano, backing vocals), longtime sidekick Stephen Bruton (guitar, mandolin, backing vocals) and Jim Keltner (drums). The album is so intimate it makes the listener feel as if they are sitting in Kristoffersonâ€™s living room while he picks and sings just for them.

Kristoffersonâ€™s story is fairly well known: he had a dreamâ€”along with the necessary talent and ambitionâ€”to become a songwriter. After turning down a teaching position at West Point, the Rhodes Scholar hoped to get his foot in the door of the music business by taking a job as a janitor at Columbia Records. It wasn’t long after arriving in Nashville that he was receiving armloads of acclaim and being hailed as one of Americaâ€™s clearest and most important voices, having penned such classics as â€œMe and Bobby McGee,â€ â€œSunday Morning Coming Down,â€ â€œFor the Good Times,â€ and many others.

Now Kristofferson has reached living legend status, but that hasnâ€™t changed or hindered his skills. This Old Road contains eleven gems that explore love, gratitude, aging, war, and his ever-present theme of freedom. â€œIf you took freedom out of the songs, youâ€™d have very few Kristofferson songs,â€ he laughs.

â€œIf I had to describe it in one word, Iâ€™d say itâ€™s honest,â€ he says of This Old Road. â€œItâ€™s all pretty close to the bone, about my own personal journey. Itâ€™s about what sense Iâ€™ve made of my life up to now.â€

Kristofferson says a recent return to the road without his band helped to put a focus on the songs. â€œThereâ€™s an honesty in the sparseness. It feels like direct communication to the listener,â€ he says. â€œI still have more fun when Iâ€™m with the band, but being alone is freer, somehow. Itâ€™s like being an old blues guy, just completely stripped away.â€

The tunes cover deeply emotional and personal territory. â€œPilgrimâ€™s Progressâ€ (a sort of sequel to his beloved classic â€œChapter 33â€) is a song that Kristofferson says, â€œtells the truth, a progress report.â€

The album pays tribute to those who have gone before Kristofferson – particularly on â€œThe Last Thing to Go,â€ wherein he salutes â€œthose of us who took things seriously, who were trying to move people;â€ and on â€œThe Show Goes On,â€ a song he calls â€œa fond look back at the way we were putting ourselves out there and trying to create something special.â€ On â€œWild Americanâ€ he reminds listeners of some personal heroes; people like Native American activist John Trudell and others who â€œhappen when you need â€˜emâ€ like Merle Haggard and Steve Earle.

He gives a nod to music-lovers on â€œFinal Attraction,â€ a song that was inspired by watching the communication between Willie Nelson and a large crowd of listeners. â€œItâ€™s a special thing, that relationship between the singer and the audience,â€ he says. The song ends with the words Guy Clark said to him when he was going out on stage one night: â€œGo break a heartâ€ instead of the standard â€œGo break a leg.â€

â€œIn the Newsâ€ takes a hard look at modern-day life with the refrain of â€œI want nothing but the endin’ of the war,â€ while the prayer-song â€œThe Burden of Freedomâ€ focuses on â€œthe fact that freedom is a double-edged sword,â€ Kristofferson says. â€œWhen I wrote it back in the late 60s, it was about leaving the path I had been prepared forâ€”West Point and all thatâ€”but itâ€™s mostly about doing what you believe is right whether that makes you enemies or not.â€

All of the songs are intensely personal, but one of his favorites is the bluesy â€œChase the Feeling,â€ which he calls â€œa meditation on what destructive behavior feels like, what it does to you.â€ Although unfailingly modest, even Kristofferson canâ€™t deny that â€œHoly Creationâ€ is one his most beautiful compositions. He says the song was inspired by his eight children, whom he calls his â€œgreatest legacy.â€ Kristofferson also pays homage to his family on â€œThank You for a Life.â€ However, the song is multi-layered. â€œThe best love songs can be taken on a couple different levels, so that song is being sung to my wife but also to God,â€ he says. â€œIn the end, itâ€™s all love.â€

And in the end, this album is all about love, freedom, and about Kristofferson giving a piece of himself to the listener. After all, thatâ€™s the thing heâ€™s always been best at. And on this, the most intensely personal album of his career, he goes the extra mile, creating a thing of rare beauty, grace, and eloquence.
kriskristofferson.com