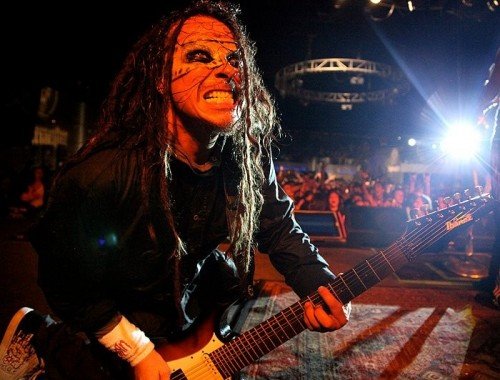 Korn have just confirmed Belfast and Dublin concert dates. The band will play The Mandela Hall Belfast on Saturday 31st March and The Olympia Theatre, Dublin on Sunday 1st April, 2012. Tickets will go on sale Wednesday 21st December at 9.00am.

Korn embrace the future on The Path of Totality, their tenth full-length studio album and second for Roadrunner Records.

Infusing dubstep anarchy into their signature sound, the legendary quartet stand on the cusp of a musical revolution for both hard rock and electronica. After the song’s impromptu debut with Skrillex at Coachella, it went on to sell over 200k digital downloads.

“You can’t help but get excited when you hear that song,” smiles Fieldy. “That’s how we knew we were on to something.”

Korn’s rebirth starts at ‘The Path of Totality’. “I want people to experience something sonically that they never have when they listen to this record,” Shaffer states.

Davis echoes that sentiment. “I want to trail-blaze. I want to change things. I want to do things we’re not supposed to do. I want to create art that’s different and not conform to what’s going on. We didn’t make a dubstep album. We made a Korn album.”
MCD Presents
KORN
The Mandela Hall, Belfast – Saturday 31st March 2012
The Olympia Theatre, Dublin – Sunday 1st April 2012