How does JONATHAN DAVIS, lead singer for multi-platinum, award-winning hard rock band KORN, plan to follow the bandâ€™s most successful European Tour to date? By doing something completely different, of course. Fans have come to expect the unexpected of the groundbreaking band and this Spring, European fans will witness another first when DAVIS steps out with a different band behind him, for a totally different tour stopping off in Belfast at The Spring & Airbrake June 23rd. 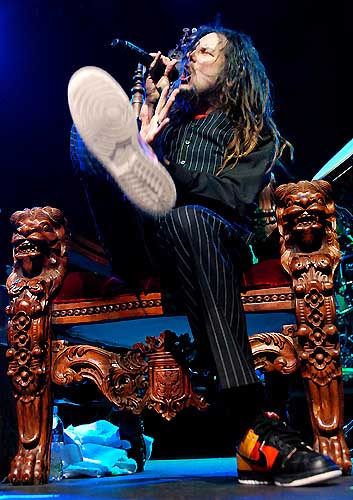 In this unique concert experience, the critically acclaimed ALONE I PLAY TOUR, DAVIS will draw from a wide variety of material, pulling from the entire Korn repertoire with obscure tracks and fan favorites, The Queen of the Damned soundtrack and select cover tunes, focusing on songs heâ€™s rarely â€“ and in many cases, never â€“ performed on stage before.

“I have wanted to do this forever. Ever since I did the Queen of the Damned record I have wanted to be able to play those songs live. The U.S. dates were a blast. Kids packed themselves into these small venues and rocked out. This is a more personal experience for me and a chance for European fans to see it up close in small rooms, says DAVIS.

Since KORNâ€™s inception DAVIS has been venerated for his visceral personal tales, exploring his anger, inner life and the painful closeness between love/hate. The bandâ€™s most recent untitled album debuted at #2 on The Billboard 200 this past summer, marking KORNâ€™s seventh consecutive Top 10 album and its second Top 10 CD of 2007 â€“ following MTV Unplugged: KORN, which was released in March.

The 2008 European leg of the BITCH WE HAVE A PROBLEM TOUR, was the scene of sold out venues and set attendance records across the continent. Sold out dates included 12 shows in the U.K., and dates in Germany, Poland, Finland, Latvia, Estonia, Belgium, The Netherlands, Sweden, Norway and the Czech Republic.