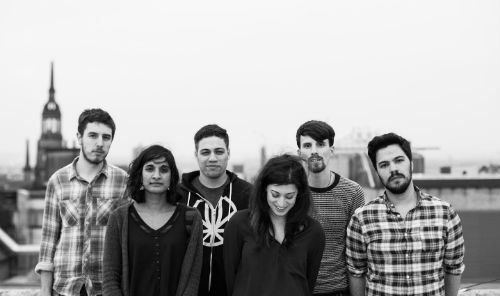 Glasgow six-piece Kill The Waves – Tim Kwant, Heather Thikey, Joe Williams, Rob Williams, John-Luke, Treadgold Dinushriya Spybey – have created a sound allowing them to straddle a number of genres, due to their ability to experiment with a variety of instruments which sees them produce a diverse sound throughout their forthcoming debut album ‘The One That Could Have Been’ released via Bloc+Music April 20th.


Hello to Kill The Waves how are you?

We’re very well, thanks for asking!

For the readers who haven’t heard your music before how would you describe your sound?

It’s very emotional. We put our hearts and souls into the music we make. There’s lots of synth and glitch beats alongside organic instrumentation like violins and cellos.

M83, Mogwai, Caribou and Radiohead have all had a big influence on us as musicians, not just for their sound but for their approach too.

Really vibrant. We honestly think it has the most diverse and unique scene in the whole UK. There’s no shortage of inspiration around you.

Any bands you would recommend our readers check out from your local scene?

You will be releasing your debut album on April 20th. What are the themes contained in the record?

It leans heavily on themes of love, death and sacrifice. Some of us were going through big changes when we made the record and you can hear it in the songs.

It’s very collaborative. We work on instrumentation together, but vocals and lyrics are Tim’s domain. It’s very much a democracy though!

So many to choose from! Someone big like Arcade Fire would be incredible, but Sufjan Stevens would be a dream come true for a few of us.

What can fans expect from a Kill The Waves live show?

We like to think we connect with those we’re playing to, not just because of the songs but because of our passion for our music.

What are your plans after the album release?

We’ll be playing dates across the country and working on songs for a new album.