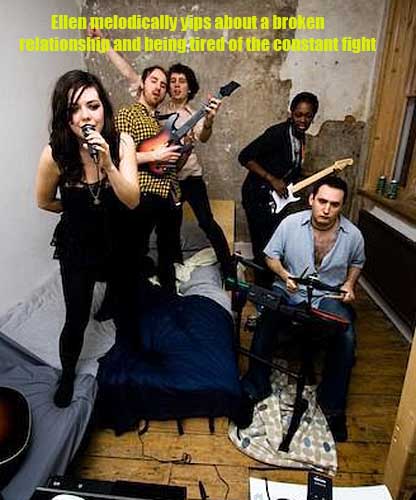 Here’s the first peek at Kids Love Lies amazing new video to single ‘Count In My Head’ out 13th April. It’s made up of over 3,500 video stills. The single is picking up plays on XFM, 6music and Radio 1.

Kids Love Lies are Ellen Murphy (vocals)Leigh Harrison (guitar),Claudia Mansaray (bass guitar),Matty Saywell (guitar) and Raf Singer (drums). They formed in November 2007 after 4 strangers were drawn together by their shared love of frenetic post punk and after endless searching found the missing link in pop pixie Ellen (or mad dog Murphy as she refers to herself on the myspace).

‘Count In My Head’ refers to the Brit post punk scene and is a short, catchy jagged pop song that sounds like the Noisettes covering Sleater Kinney with Jemima Be Your Own Pet on vocals. Ellen melodically yips about a broken relationship and being tired of the constant fight “Only said what you want me to say, only did what you want me to do”.