Men would most like to be stuck in a traffic jam with Kelly Brook and women would most like a good giggle with Peter Kay this Bank Holiday according to a survey by Swinton, the UKâ€™s leading high street car insurance retailer.

In a poll of 2,000 motorists, Kelly Brook beat Dancing on Ice presenter Holly Willoughby as the person men would most like to have as their passenger. Phoenix Nights comedian Peter Kay came third and Virgin Tycoon Richard Branson was the fourth most popular celebrity. 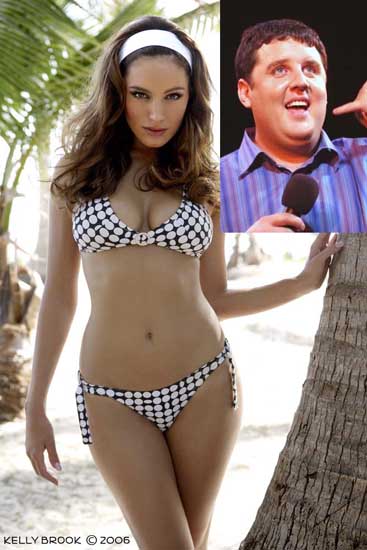 A Swinton spokesperson said: â€˜â€™Being stuck in traffic is incredibly boring and with 18 million drivers taking to the road this Bank Holiday many motorists are facing long journeys.

â€œItâ€™s funny to see that women seem to think that personality is the key to a good driving companion, whereas men are choosing looks.â€

The research also found that 24 per cent of Brits said their husband or wife is the most annoying passenger they could end up driving with.

One in five drivers say that they row with fellow passengers at least once during a long journey and because of this, almost two thirds say they prefer driving by themselves to avoid arguments.

A cheeky 38 per cent of people even admitted they had made up a lie to avoid having to give someone a lift.