Guests at The Camping and Caravanning Club’s Albufeira rally site in Portugal were treated to a surprise guest recently, in the shape of singer turned actor Keith Duffy. 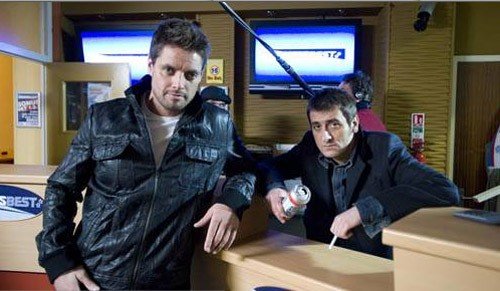 The talented star, who plays Ciaran McCarthy in Coronation Street, took time out from his busy schedule to attend the Club’s annual Pig Roast celebrations, organised by Bob and Lyn Geary and the Boica family, on behalf of the Club’s Carefree Worldwide Travel Service.

Keith treated the lucky campers to a duet, which he sang with his father, and mingled with members throughout the weekend.

As a child, Keith was a keen camper and he said: “One of my favourite camping holidays was when I went away with four other families who also had children.

“I remember afternoons of catching frogs and visiting the fun fair. The adults spent the evenings socialising as we played together.”

His love for camping is so great; Keith has even pitched up with his Boyzone band mates!

“We took couple of tents and sleeping bags and set up camp in a remote forest in Ireland. It was really nice to get away and relax- there were no pubs and lots of privacy.

“Camping continues to be a big part of my family life. My mum has a static caravan, where she spends most weekends, and my children frequently stay with her.”

Bob and Lyn Geary, who have been Club stewards for eight years, were elated by the response from campers and added: “Keith made the weekend very memorable by laughing and joking with the crowd. He kindly signed photos and spoke to everyone.

“We are extremely grateful to Keith and everyone who contributed to the event.”

To attend the Club’s Albufeira rally site or for more information on the Club’s Carefree Worldwide Travel Service, telephone 0845 130 7701 or 024 76 422024 or visit: www.campingandcaravanningclub.co.uk/travelabroad