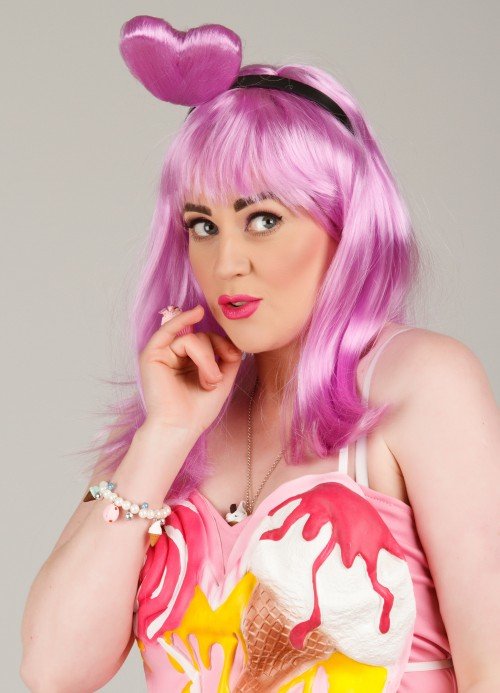 For the last six months she’s been performing as the country’s leading tribute to the sassy singing sensation.

But school teacher Paula, 32, revealed no matter who performs at The Odyssey Arena, Northern Ireland audiences just aren’t ready for the full Katy Perry experience at a tribute show.

Paula, who has performed at large charity gala balls, in nightclubs and children’s parties said even her family were “shocked” when they found out the former church choir singer was to wear skimpy flamboyant tutus and sing lines such as “I kissed a girl and I liked it”. 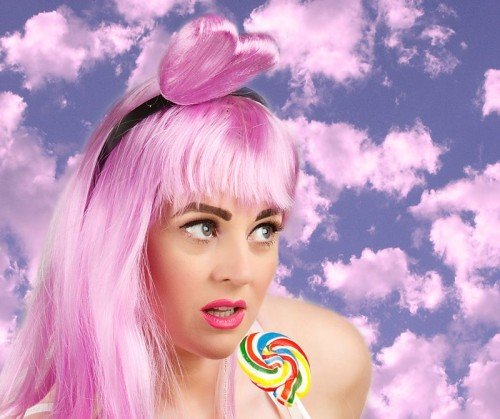 She added: “When my family found out I was going to be imitating and performing as Katy Perry they were shocked.

Obviously she is best known for wearing skimpy outfits and singing about kissing girls and they knew me as a classically trained singer who had studied with the Belfast School Of Music, sang in church choirs and more recently sang soprano soloist for Mozart’s Requiem in Canterbury Cathedral.

“It wasn’t an easy transition for me though. I had to tell my mum ‘I’m in my 30s now so if I want to sing about “peacocks” then I can’t compromise the act as Katy Perry for fear of shocking my family.

“That has been something they have had to come to terms with, the fact that I’m not little girl anymore singing sweet tunes in church- sometimes that’s the way some people remember me and thy forget I’ve grown up.

“In saying that my family and friends have been more than supportive and have always been behind me 100 per cent no matter what I have chosen to do, they understand that’s just who I am.”

And while there are many things Paula can’t cut out of her show she admits she’s had to tone it down for the local market.

“Katy Perry on TV or in a big arena show is very very different to being up close and personal with people” said Paula.

“A lot of the things Katy Perry might do in her music videos or on stage aren’t possible at a children’s birthday party or at a nightclub gig.

“In Northern Ireland we aren’t just as out there as the Americans so I try to make sure I keep the essence of who Katy Perry is but not be too explicit or distasteful in the shows.”

Although Paula is a trained singer and has been teaching music for a number of years herself as well as performing all genres from opera, classical, oratorio and musicals to pop, rock, jazz and traditional she revealed Katy Perry has been her biggest challenge to date.

She said: “The Katy Perry thing started off as a joke when my hair-dresser suggested I go from blonde to dark. When I did people started joking that I looked like Katy Perry.

“I had responded to an advertisement for Donna Fleming’s Dolly Parton tribute band who needed a keyboardist and began to rehearse with them. 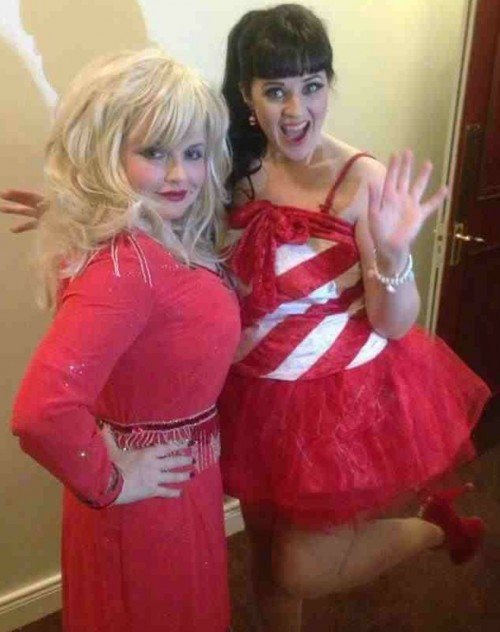 Paula as KatyPerry with Donna as DollyParton

“I happened to mention about someone saying about Katy Perry and Donna asked me to sing a bit of one of her songs.

“Next minute I knew I was the one rehearsing a tribute show and I haven’t looked back since.

“Throughout my career I have struggled to get noticed as there was nothing before that was making me stand out from the crowd.

“I’ve made mistakes, sang wrong song choices, wrong image and many other things. My biggest struggle was trying to decide what genre or style of music to focus on.

“As soon as I was being advertised as a Katy Perry tribute I was signed to Davison Entertainment & Promotions Agency and became listed under Donna’s company Prems Events. I couldn’t believe it, I only went to play keyboard.”

Very quickly Paula had to learn her Katy Perry set and get a selection of costumes together for her first gigs.

She added: “At the beginning the gigs were booked so quickly that I only had two weeks to learn 20 Katy Perry songs, I knew the songs but not the lyrics.

“Soon after I started rehearsing I began ordering the famous blue wig and costumes and making some of my own.”

Paula was no stranger to rehearsals and deadlines, she had previously worked with Anúna the vocal part of Riverdance.

Now Paula is part of the biggest tribute act booking agency roster in Ireland and Northern Ireland and performs as a solo act as well as with up to six backing dancers and a full live band.

“I love being a tribute act” said Paula. “It makes me feel a wee bit famous especially when I am asked to do meet and greets, sign autographs and there is a queue of people waiting to get their picture taken with ‘Katy Perry’.

“I suppose I can relate to Katy because like her I am a bit kookie myself.

“Some people claim being a tribute act isn’t credible but Katy Perry has had so many hits. She was the only artist apart from Michael Jackson to have five number one singles off the same album.

“Songs such as Firework, California Girls, Hot n Cold, I Kissed A Girl, Last Friday Night (TGIF),Wide awake, Part of me, Teenage dream, The One that Got Away really get people up on their feet having fun.

“I don’t care if people don’t rate her, I’m enjoying myself and that’s all that matters.”

Paula is available as Katy Perry as a look alike as well as a sound alike for events, nightclub gigs, kids birthday parties, weddings and more.
Exclusive by Tina Calder