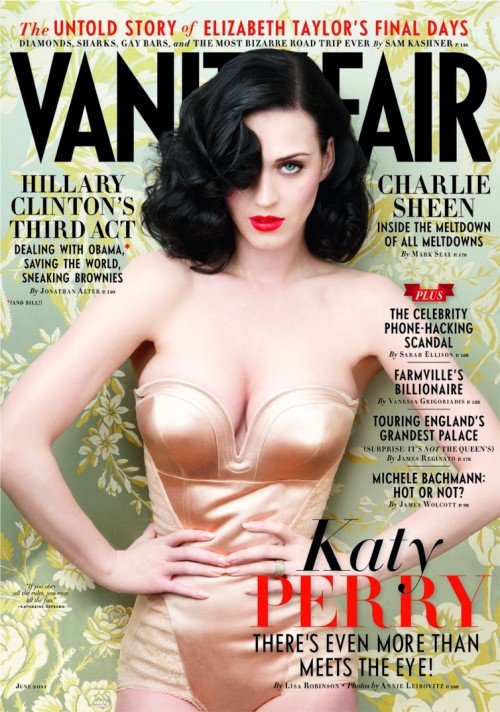 “People might think that the leaves are tasty and buttered up and delicious, and they don’t even know that there’s something magical hidden at the base of it.

There’s a whole other side [of me] that people didn’t know existed.”

Perry, who tells Robinson that she wants her ashes shot out over the Santa Barbara coast in a firework, reveals that one side of her she has definitively left behind is her born-again upbringing.

“I didn’t have a childhood,” she says, adding that her mother never read her any books except the Bible, and that she wasn’t allowed to say “deviled eggs” or “Dirt Devil.”

Perry wasn’t even allowed to listen to secular music and relied on friends to sneak her CDs.

“Growing up, seeing Planned Parenthood, it was considered like the abortion clinic,” she tells Robinson.

“I was always scared I was going to get bombed when I was there…. I didn’t know it was more than that, that it was for women and their needs. I didn’t have insurance, so I went there and I learned about birth control.”

“I think sometimes when children grow up, their parents grow up,” Perry says of her evangelical-minister parents.

“Mine grew up with me. We coexist. I don’t try to change them anymore, and I don’t think they try to change me. We agree to disagree. They’re excited about [my success].

They’re happy that things are going well for their three children and that they’re not on drugs. Or in prison.” Perry’s mother confirms that she is proud of her daughter’s success, telling Robinson, “The Lord told us when I was pregnant with her that she would do this.”

“I come from a very non-accepting family, but I’m very accepting,” Perry says of her religious beliefs as an adult.

“Russell is into Hinduism, and I’m not [really] involved in it. He meditates in the morning and the evening; I’m starting to do it more because it really centers me. [But] I just let him be him, and he lets me be me.” Perry says she didn’t stick with the mold growing up. “I have always been the kid who’s asked ‘Why?’ In my faith, you’re just supposed to have faith. But I was always like…why?” she says.

“At this point, I’m just kind of a drifter. I’m open to possibility…. My sponge is so big and wide and I’m soaking everything up and my mind has been radically expanded. Just being around different cultures and people and their opinions and perspectives. Just looking into the sky.”

Of her marriage to Russell Brand, Perry says that there is “never a dull moment” and that Brand has “never lied to me once. I trust him; there’s just a level of trust that we’ve built up.” When asked about the infamous photo Brand tweeted of her without makeup in the middle of the night, Perry laughs it off.

“We were just messing around,” she says, “I didn’t really care. I mean, when I go to rehearsals I look like that. I’m every woman. It takes a village to make me who I am…. You don’t have to wake up looking like, you know, Gisele.”

“The press is just not your friend when it comes to a marriage,” Perry explains of her need for privacy in her relationship with Brand.

“That’s why we didn’t sell the pictures of our wedding, and we got offered millions of dollars for them, millions.” Why not take the money and give it to charity?

Robinson asks. “Well, I can always do that later for something else; maybe if I have a child,” Perry says. “But I’ve seen too much of it with other people—it’s the wrong kind of attention. It detracts from the reason why you exist. We wanted that moment to ourselves.”

The June issue of Vanity Fair hits newsstands in New York and L.A. on Thursday, May 5 and nationally and on the iPad on Tuesday, May 10.
Photo by Annie Leibovitz
www.vanityfair.com