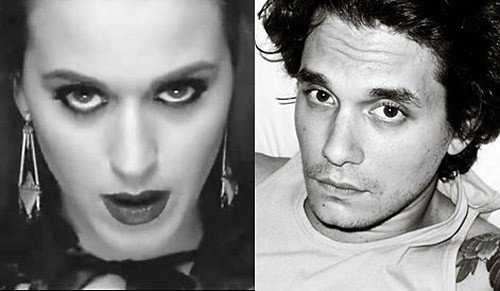 Katy Perry might be going from “Teenage Dream” to teenage nightmare both in her love life and in her work.

In an interview with Capital FM promoting the UK premier of her documentary Katy Perry: Part of Me 3D, Katy eluded to a different, “darker” path for her third release.
“I would love to just let it be the black box of who I am.”

Despite the reference likening a personal diary to the electronic equipment key in determining causes fatal plane crashes, Katy maintains that she’s an upbeat person, not interested in dwelling on life’s little turbulences.

“I’d never devote a whole record to heartbreak,” she revealed. “I’m happy, I’m in a good place, I’m looking forward to my future”.

Could Katy’s future include spending time with another notorious womanizing star?

Our friends at Hollyscoop has the exclusive scoop of Katy Perry who was seen getting her flirty flirt on with, wait for it…. John Mayer.

Less than a week after her divorce from Russell Brand was finalized, Perry and Mayer were spotted at a party over the weekend and they seemed to be pretty close.

A source told Hollyscoop that they definitely appeared to be very into each other.

Come on Katy, what are you thinking girl? You can’t go from one jerk to another… John has been behaving badly all over Hollywood for years. Jennifer Aniston would probably like to forget the whole thing ever happened, and Taylor Swift even wrote a song about.

It seems a good rule of thumb to avoid boys who inspire songs about heartbreak….

Unless, of course, you’re looking for more material for your little black box – in which case, carry on, but don’t forget to buckle your seat belt – because there will definitely be a crash landing.
By Angela Wagner
For the full story go to Hollyscoop.com