Katie Melua releases â€˜Toy Collectionâ€™, a melancholic and whimsical song written by Katie for the film â€˜Faintheartâ€™ (a project developed on Myspace) and inspired by Katieâ€™s own enjoyment of games and toys.â€œI bought an antique dollâ€™s house for myself and I am obsessed with it. Maybe itâ€™s because I didnâ€™t have many toys growing upâ€ Katie said, referring to her upbringing in Georgia. â€œWhoâ€™s to say when you get older, you donâ€™t need a toy collectionâ€ 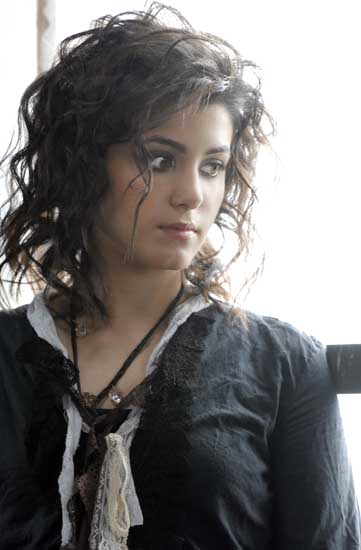 Taking the lyric to heart, on her current tour Katie and her band have been mastering the skill of flying remote controlled helicopters with each of them buying their own toy. â€œYou have to have some kind of entertainment going on when youâ€™re not sound-checking or performing and the helicopter just became this fad. Before the doors open, when the venue is empty, arenas are the perfect place to fly them. Itâ€™s incredible how much skill you need for it, to do things like landing it on a table or making it fly underneath, it takes ages to perfect it.â€

â€˜Toy Collectionâ€™ is one of three new songs recorded for the release of â€˜The Katie Melua Collectionâ€™, a musical summary of the 24 year oldâ€™s journey so far, which is being released to coincide with Katieâ€™s arena tour in October and November. This two disc set comprises 17 songs – including ‘The Closest Thing To Crazy’, Nine Million Bicycles’, the number 1 duet with Eva Cassidy ‘What A Wonderful World’ and 3 previously unreleased bonus tracks â€“ and a live DVD filmed earlier this year in Rotterdam. Highlights from Katieâ€™s three albums (â€˜Call Off The Searchâ€™, â€˜Piece By Pieceâ€™ and â€˜Picturesâ€™) are joined by â€˜When You Taught Me How To Danceâ€™, from the film Miss Potter, and the three new songs recorded for this album release â€“ â€˜Toy Collectionâ€™, â€˜Somewhere In The Same Hotelâ€™ and â€˜Two Bare Feetâ€™.

DVD
The Arena Tour 2008, Live from Rotterdam
Plus â€˜Behind The Screensâ€™ â€“ a short film about the preparation and design of the tour production

Katie is currently on tour in Britain completing her three month tour which concludes in Brighton on November 11th.

Are we ever too old to have toys? Not according to recent research. Global toy sales reached Â£45 billion in 2007 with 88% of US households with no children under 18 buying at least one toy last year.