Supermodel and fashion icon, Kate Moss, has shown her support for the Sport Relief 2010 campaign by modelling a stunning one-off dress designed exclusively for the charity by Londonâ€™s hottest young designer William Tempest.

The dress is made partly from recycled mosquito nets, to highlight Sport Reliefâ€™s commitment to tackling malaria. 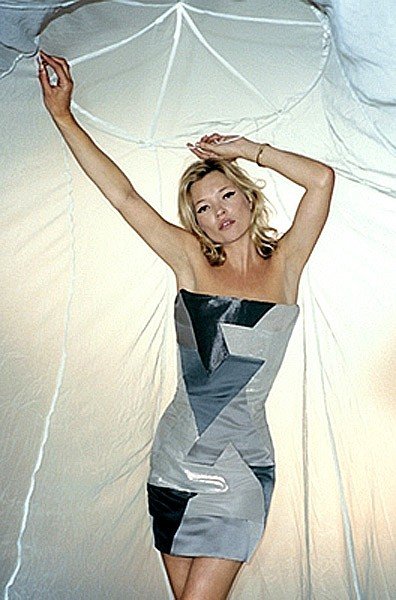 Both the supermodel and the designer are urging the UK public to get involved and raise money for Sport Relief which could be spent on a life-saving fabric you wonâ€™t see on the catwalk â€“ long-lasting, insecticide-treated mosquito nets, one of the easiest and most cost-effective methods of preventing the spread of malaria.

The dress has been sculptured and corseted in William Tempestâ€™s signature style with individual panels sewn together for a mosaic effect.

Kate said: â€œI was shocked to hear that one child dies from malaria in Africa every 30 seconds, thatâ€™s why I was happy to be involved in this important project for Sport Relief.

William Tempestâ€™s dress, which incorporates recycled mosquito nets is absolutely gorgeous, I loved wearing it and working with William. Itâ€™s a great way of raising awareness of the seriousness of malaria, a disease which is both preventable and treatable. Donating just Â£5 can pay for a net which helps protect from potentially fatal mosquito bites that spread malaria.â€

William Tempest added: â€œIâ€™m really proud and excited to have designed a dress for Sport Relief with the serious message of highlighting the power of the humble mosquito net as a life-saving tool against malaria.

â€œTo help raise awareness about malaria I designed a structured dress which incorporates layers of a mosquito net in panels. Kate looks amazing in the dress and I hope its auction will raise lots of money and bring awareness to such a great cause.”

Over one million lives are lost every year because of malaria – even though it is both preventable and treatable. Sport Relief works to help make that statistic a thing of the past by providing simple but crucial ways to fight the disease; like mosquito nets and information on how best to use them, and also rapid-testing kits so those who do become infected can get the help they need quickly. Together, these measures will contribute to reducing the number of preventable deaths from malaria, especially for children under five.

The money raised through Sport Relief is spent by Comic Relief to help poor and disadvantaged people, living unimaginably tough lives, both at home in the UK and across the worldâ€™s poorest countries.
www.sportrelief.com/