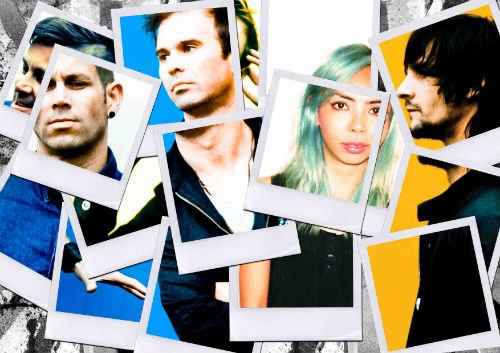 For lovers of: The Hives, The White Stripes, The Stooges, Nirvana…London-based rock band Katalina Kicks – Ian George (Vocals/Guitar), Harry Stam (Guitar / BVs), Nadia Silverstone (Bass / BVs), Jase Wilkinson (Drums / BVs) – unleash their sophomore album, ‘Dirt’, on 7th September 2014 via Snappi . Their single ‘National Hero’ harks back to an era of stomping drums, angry bass and guitar that chops through you like an axe…

To support the release Katalina Kicks will be touring the US and Latin America as well as hosting a huge album launch party when they return to the UK in Autumn.

Katalina Kicks hello how are you?

Swimmingly well and full of energy!

Katalina Kicks is a strange name. How did you come up with that?

Ian: It’s a mash together of the monster sounding Gretsch ‘Catalina’ drum and an old Aussie band called the Bitter Sweet Kicks. We spent ages sitting in pubs brainstorming names and wanted something a bit unusual that at the same time gave off an full on & energetic vibe, so ended up putting a few things together.

Jase: We’re like a Molotov Cocktail. Home made and explosive!!
I would say we are an eclectic mix of punkrock indie psychedelic goodness served best in a hot and sweaty show environment.

Ian: Raw and aggressive, but also melodic. We fit left of centre – think of bands like The Clash, The White Stripes, Hives and Nirvana – we’re not mainstream, but the songs are pretty easy to sing, pick up and mosh along to.

Would you say the Garage rock/punk scene is prevalent in London at the moment?

Ian: It’s always coming and going to be honest, but I wouldn’t say it was prevalent. We’ve always been about doing our own thing anyway! At the moment there are a few good bands with a punk/grunge/garage feel.

Jase: Don’t know and don’t really care as a band we don’t follow the trends or the masses. We just do what we do, wear our guitars low, jeans (or in Nadia’s case -skirts) tight and ensure we put on an amazing memorable show.

Are there any bands in your home town that you would recommend?

Nadia: They are called Idlehour.

Ian: We also rate the Graveltones who are doing well for themselves.

You have played Camden Rocks, Koko and Club NME what should people expect from a Katalina Kicks live show?

Jase: Stand to close to the stage and your face will melt!!! We’re hard hitting but refined, we give blood, sweat and tears and nothing less. You certainly get your money’s worth.

The band have been picked up in the US. Do you think there is more of an appetite for your sound state side rather than in the UK?

Jase: The UK is dominated by throw away disposable X Factor or one boy and his acoustic nonsense. Thank god for bands like the Arctic Monkeys and Royal Blood who have opened the eyes of a new generation. Rock is alive on both sides of the Atlantic but if I had a preference it would be the U.S. Better weather and bigger burgers.

Ian: Yeah with Royal Blood just getting a No 1 album who knows what is going on in the UK – critics say that rock is dead and they come along and prove the theory wrong. You would hope that there is always an appetite for rock bands who put on a good show over here, but yeah traditionally the States has always been more receptive to British bands – who actually sound British (rather than another pet hate of mine – British bands who try to sound American.)

You have been compared to the likes of The Hives and MC5 who are great bands. Is their brand of balls out rock and roll missing in today’s rock bands?

Jase: The Hives are one of our favourite bands and they go about their business in a honest way. These guys push the boundaries and always giving everything shows true inspiration. I want to hear music that is fun but gets over a message. I don’t want too see or hear some pre-pubescent child whining into his blanket about how his date left him. Grow some balls and rock out!

If you could support one band who would it be?

What can we expect from Katalina Kicks for the rest of 2014 and beyond?

Jase: A lot more noise, lots more shows more albums and features on those annoying adverts that just stick in your brain. We already have another few tracks written and more being developed, so don’t expect anything else than the very best in the future!!!