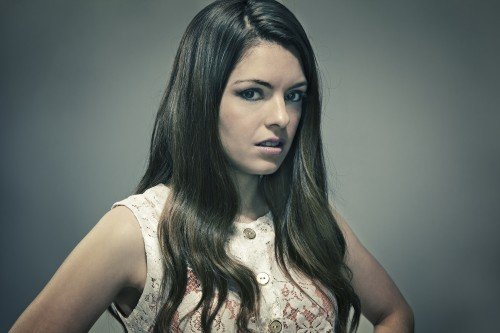 One of the secrets to Shameless’ success and longevity is its ability to keep what’s best about the show, but constantly innovate and refresh at the same time. One way of doing this is to introduce sparky, vibrant new characters, and they don’t come much sparkier or more vibrant that Ruby Hepburn.

The 22-year-old Scot is Mimi’s niece, and seems more than capable of holding her own amidst the chaos of the Maguire household. But, as with so many interesting characters, beneath the bravado, there is a vulnerability.

Kari Corbett plays Ruby. Here, she talks about her excitement at her new role, acting opposite the great Frank Gallagher, and why she hopes there will be no need for subtitles when she’s onscreen.

You’ll be hitting our screens in January as Ruby Hepburn in the new series of Shameless. What’s Ruby like?

She’s part of Mimi’s family. She’s a bit of a mystery – she sort of explodes into the Maguire household with no real back story. She’s a very confident young woman who seems to have no problem with moving in with the Maguires. She’s quite fiery, because she’s had to survive on her own for quite a long time. She’s had to survive as a young woman in a world of men, so she can stand up for herself. She’s very aware of the power she can have, and how to manipulate people as a survival method.

Will we get to know a bit more of her back story as the series progresses?

Yeah, we do. As she becomes part of the Maguire family, we find out more and more about her. Part of her personality and character is that she doesn’t trust anyone, she’s very fearful of letting people in. She can’t be vulnerable. That’s why you don’t get to see very much of her back story in the beginning – because she tries to survive without giving anything away.

She likes to look stylish, doesn’t she?

I think she models herself on mass pop culture. She’s an early 20s woman with not a lot of money, but she can do approximations of what’s fashionable.

Not even slightly. How we dress her is that she understands what’s in fashion, but she can’t afford it, so she always gets it a little bit wrong. I think that’s very true of a lot of people who live on the Chatsworth Estate – it’s nearly there, but it’s a version of what’s fashionable that always looks slightly off.

Does the fact that she dresses very differently from you help you get into character? Does wardrobe help you take on a different persona?

It does really help. I think I prefer to play characters that are quite different from me in their aesthetic and their sound and how they behave. In a way, once you’ve gone through make-up and costume, you’ve separated yourself slightly, and that’s very definitely helpful in telling the story.

As far as accents go, you’re using your own in the series, aren’t you?

Yeah, just using a Glasgow/west coast Scottish accent – whatever mine is now. It’s changed a lot from different places that I’ve lived. The character brings in the odd Scottish phrase as well, which I think is quite interesting for national television. But of course you also need to be understood, so part of my job is to ensure my accent doesn’t become too thick.

Didn’t Trainspotting have to have subtitles in America?

Yeah, and I think Sweet Sixteen, the Ken Loach film, I’m pretty sure that had subtitles when it was shown in the States.

Are you proud of your Scottish identity?

I’m quite careful not to be nationalistic. I don’t hold pride just because I am Scottish, but I do enjoy some of the cultural aspects of being Scottish. I wouldn’t say that I have this pride that excludes being British or European or human. I think a lot of people can ride on the back of their pride at being Scots, and I don’t think I’d like to do that.

They seem to clash quite a lot, whether it’s in The Jockey or the street. Their lives seem to cross, and it can be quite confrontational. Ruby can be very dismissive of him as some sort of tramp that she thinks is sexually inappropriate, and inappropriate in general. But what’s so wonderful about how they’re writing these two characters is that they manage to see each other as very intelligent in a room full of people who don’t see their intelligence. That’s really heart-warming, and very interesting to perform, when you uncover that Ruby actually thinks Frank is really clever. She might still think he’s vaguely disgusting, but she gets that he’s aware of things that other people might not be.

What does Ruby call Frank? She’s got some interesting names for him, doesn’t she?

Lots of bad words including “piss-soaked tramp”! In the first few confrontations she tries her hardest to be as scathing as possible in true Shameless manner, but I don’t really want those words to be used as taglines!

Has working on Shameless been the experience you expected?

There isn’t another job like Shameless in British television, I don’t think. So I don’t know if anything can quite prepare you for how challenging it can be to play a dark comedy. A very irreverent dark comedy can be quite a challenge, and can throw up every day that’s very surreal but very human, and then very funny and very dark. So no matter what you expect you’re walking into, it’s going to be something much bigger and much more diverse.