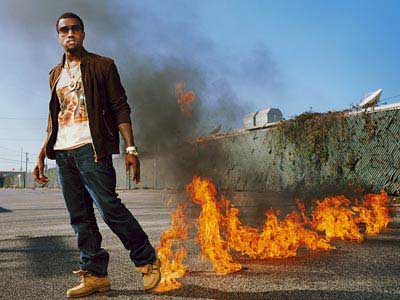 Kanye West’s forthcoming album, “Graduation,” is coming sooner than expected. The album is due out in September 11th 2007 according to his Official website kanyewest.com

“Can’t Tell Me Nothing,” the first single from “Graduation,” was co-produced by West and DJ Toomp. A Hype Williams-directed video for the song debuted last Friday on West’s Web site.
Kanye Westâ€™s new album will also include a collaboration with Coldplay frontman Chris Martin on the song “Homecoming.

“Iâ€™m graduating from a school called â€™Universe City,â€™ ” Kanye explained of his Graduation concept.â€I think the sound is bigger this time. Itâ€™s bigger and simpler, where the notes really connect with you and I say lines … I know the power of my words, so when I rap, I know itâ€™s gonna impact the world. I know Iâ€™m gonna be performing anywhere from the Summer Jam stage [at New Jerseyâ€™s Giants Stadium] to [New York nightclub] Speed to the House of Blues in L.A., to London to Brazil to Ireland. … Iâ€™m making music for somebody sitting in a car on their way to work trying to get through traffic and my music is helping them zone out, to a 60,000-seater where Iâ€™m opening up for the Rolling Stones or U2. Iâ€™m not talking about you two â€” Iâ€™m talking about U2 the group. Like I say, â€™Why would I do a song with you two when I just got offstage with U2 ? Iâ€™m not even talking to you two.â€™ Thatâ€™s how I feel.”

“Iâ€™m ready to take over the world once again,” he added. “I have a lot to say. I got a lot more music to make. Iâ€™m still going through stuff. People are still going through stuff. I make music people can relate to every day. My music just isnâ€™t about my story. … Thereâ€™s not one artist in the world that has as much responsibility as me. When I deliver a piece of music, it has to connect with the most genres of music. I donâ€™t care who you name. If you name rap artists, their only responsibility is to rap crowds. If you name a pop artist, their only responsibility is to a pop crowd. If you name some French dance music, their responsibility is to the cool crowd. But I have to deliver songs. All these people are looking at me from super-middle America to the hipsters like, â€™Whatâ€™s he gonna do next ?â€™ ”

As well as his own album, Kanye has also been busy producing Commonâ€™s “Finding Forever” and Lil Wayneâ€™s “Tha Carter III.” Donda on the other hand has just released a book entitled “Raising Kanye : Life Lessons From the Mother of a Hip-Hop Superstar,”

Tickets for the Odyssey Arena show will be Â£38.00 Seated & Â£33.00 GA will go on sale from the Odyssey Arena and usual Ticketmaster outlets. For credit card bookings telephone 0870 243 4455. Book on-line via www.aikenpromotions.com; (Credit card and internet bookings are subject to service charges) and Tickets for the Marquee at the Phoenix Park will be GA â‚¬59.80 on sale from Ticketmaster outlets nationwide booking line no.0818 719 300.