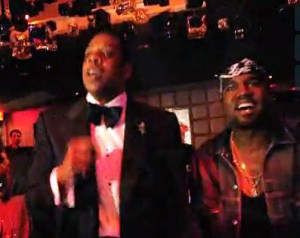 While having a grand ol’ time at the grand opening of the Marquee nightclub in Las Vegas on New Years Eve, Kanye West announced that his joint album with Jay-Z titled “Watch The Throne” will be released in a week.

Not sure if we necessarily believe the album will drop a week after NYE, but, at least it keeps us excited about it.

Though this collaboration with Jay-Z has been in the works for some time, no release date had been scheduled, and West’s spokesman told Rolling Stone magazine that he is not aware of any record coming out next week.

He did confirm that a full album’s worth of material has been recorded.

Jay-Z After Party at Marquee from Seth Browarnik on Vimeo.
www.rollingstone.com
www.billboard.com