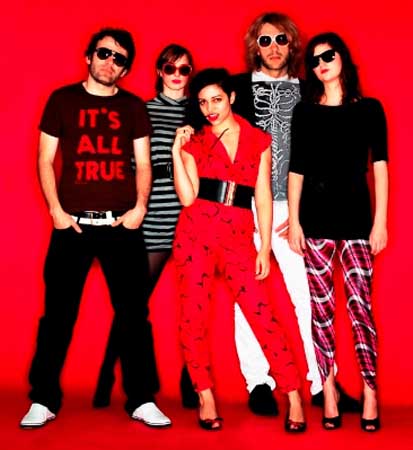 The Stiff Kitten have teamed up with promoter/DJs Joe Dougan and Jim Harte to launch FAD at The Stiff Kitten every Friday. Fad is a new weekly alternative night featuring a mash up of new indie, old skool hip hop, classic tracks & quality dance music from residents Joe and Jim. The new night launches on Fri 5th Oct with London based 5 piece New Young Pony Club.

Having successfully run Radio K at McHughâ€™s in the city in recent years, talented promoter Joe Dougan adds â€œFAD is a new concept for The Stiff Kitten. Theyâ€™ve successfully showcased bands before such as ASH but FAD nights will be mix of great bands and exciting DJs delighting in a plethora of genresâ€. Also watch out for flourishing Sketchy DJs who take to the FAD stage at the end of October.

London based 5 piece New Young Pony Club exploded onto the UK music scene in 2006 with a coveted slot on the NME Rave Tour alongside The Klaxons and CSS. Effortlessly marrying dance music with rock and pop, the band were quick to dismiss the â€˜New Raveâ€™ tag, and quickly proved, through tracks like â€˜Ice Creamâ€™ and â€˜The Bombâ€™ that their music had none of the transitory qualities of their apparent peers. Their incendiary debut LP â€˜Fantastic Playroomâ€™ was released on July 9th to instant praise from the UK music press, as well as a nomination for the 2007 Mercury Music Prize. A classic Morrissey/Marr axis lies at the warm, beating heart of NYPC â€“ production guru Andy playing Mr Music to frontwoman/ singer Tahitaâ€™s all-mouth-and-trousers. Itâ€™s a singular chemistry thatâ€™s marked NYPC as one of 2007â€™s most talked-about, must-hear, must-see bands.

They have already achieved plenty. NYPC singles â€œGet Luckyâ€, â€œIce Creamâ€ and â€œThe Bombâ€ have already proved irresistible. Simultaneously targeting heads, hearts and feet, these were glorious tunes that left the safe harbour of easy categorisation for the clear blue seas of â€˜anything goesâ€™. â€œIndieâ€ or â€œdanceâ€, perhaps â€“ but only in the same way that you might say that about Talking Heads, Blondie or ESG. Anyway, they easily made good on the bandâ€™s hopes: to put the fun back, and get people dancing.

Now NYPC have done more than perhaps would be reasonably expected of a great singles band: theyâ€™ve made a great album. In fact, with their unconventional backgrounds â€“ Andy a graduate of UOL: The University Of Life, with his peace-activist, CND-mad mum and Tahita raised in transit somewhere between Egypt, a Greek motorway and New York City â€“ you might say Fantastic Playroom is the album theyâ€™ve been destined to make all their lives.

They put out â€œIce Creamâ€ in early 2005. 500 copies. The response was insane. Instantly playlisted on XFM and eventually spangling its ankles onto MTV2 in The States. They signed to like-minded label Modular, home to The Avalanches, Cut Copy and Wolfmother. They found fans in David Bowie, Lily Allen and Stella McCartney. Lead singer Tahita lit up NMEâ€™s â€œCool Listâ€. Then they wheeled out the big guns, muscling up their live show with Sarah Jones (drums), Igor Volk (bass) and Lou Hayter (keyboards), making the NYPC on-stage experience a complimentary, but very different, one to NYPC on-record. Tahita says â€œThe lyrics of our songs are provocative. Whether sexually provocative or intellectually provocative. Who says you canâ€™t have songs that have a cultural resonance, that have a sing-a-long chorus, that make you go away and think, make you want to fall in love with somebody or dance?â€.

Tickets for the launch of FAD with NYPC are Â£9, or Â£10 on the door. There is free entry to the next FAD on 12th Oct with ticket stub. Regular admission prices are Â£4 before 11pm Â£5 after. Tickets on sale from
www.thestiffkitten.com / Virgin / The Stiff Kitten bar.
Drinks promos: Jack Daniels / Bottles of Stella / Stolichnya Vodka â€“ All Â£2
myspace.com/newyoungponyclub