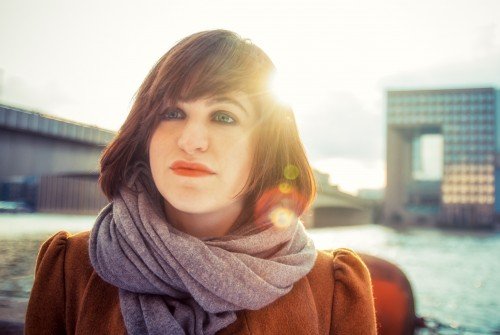 Talented young Irish singer-songwriter, Julie Hawk, has been making waves on the London unsigned music scene as of late. Her new EP will undoubedly see her acheive an ever greater level of success there and further afield too.

Of course Ireland will always be home to the Galway lass and we at Fame love the fact that she has decided to grace Irish shores with a short tour this April.

Fame caught up with Julie prior to the tour and had a short chat about her music, influences and much more. Here are
highlights of that spirited interview.

Hi Julie, first up what can you tell our readers about your EP, what can they expect from it?

I couldn’t say we’ve stuck to our ‘folk’ guns by any standard! The songs were definitely born in the acoustic scene, but as Matt and I approached recording, we expanded the sound massively with electric guitar, strings, drums, and synths and lots of other fun things!

That said, they are the first five songs I ever wrote, and are very personal to me terms of language and vocal expression. To be honest, I consider it a fairly uplifting EP, but people seem to pick up of on the darkness of it at every corner.

You are offering your single ‘Narc’ as a free download too we hear. Why is that?

Narc is especially for everyone who’ll be coming to see us on tour, as a thank you for coming out to support us. We’re all major Interpol fans so it was a bit of an indulgent choice admittedly. I hope it goes down well with the live audience.

You are of course set to play some Irish shows very soon. Are you looking forward to them, I’m guessing the Galway one will be especially exciting for you?

I am so excited! It’s our first tour, so we’ll be learning as we go I think. It’s funny, I keep getting distracted imagining the extra things like being squished into Sam’s car, and the amount of full Irish breakfasts we’ll eat, but it’s the gigs that really matter.

That’s what really gives me butterflies. I’ve had such a positive reaction so far from everyone back home, and I’m determined to bring an awesome show back to them.

You have been playing your trade in the UK for a while now. Are there any significant differences between the Irish/UK live music scenes?

To be honest, I’m pretty out of touch with the Irish music scene recently, but I’m hoping the tour will fix that nicely. In terms of London though, there are so many open mic scenes and jam nights you can get involved with.

It’s really accessible but the flip side of that is that it’s very competitive, and sometimes lacks that genuine heart and sense of community that I’ve found in the Irish music scene.

How did you get started in the industry. Was it tough for you initially?

I Googled open mics in London, and the first one I found was in a place called the Hideaway in North London- a huge trek away from where I lived at the time.

I was shaking when I got there, and it took me about eight minutes to get through The Value of Gold! I very nearly didn’t go back again!

But through the open mic scene I met some incredible friends, I got to try out new songs, and thankfully overcome some serious nerves!

That’s where I met Matt, and we started playing and recording together.

Have you always played your own material, or were you forced to mix covers in to a live set (to maintain audience attention)?

We started playing the odd cover back when we literally didn’t have enough songs to fill a set!

We don’t do it very often any more, but there were couple like Narc and This Charming Man that we fell in love with.

It’s always cool to hear the reaction from a hardcore Smiths fan. Not sure what Morrissey’s thoughts are yet though!

Speaking of sets. What can we expect to hear at your Irish shows?

This’ll be my first time playing with the full band in Ireland, so it’ll be change from what people have heard before.

We’ll be playing all the tracks from the EP, reworked a bit for the
full band but we’re also working on a new album at the moment, and we’ve got some new tracks that we’re really excited about.

Since the band formed, we’ve headed in a much more energetic, grungy direction when it comes to the live set. I’m not expecting any mosh pits, but you never know..

What about future releases and live appearances. Have you anything lined up our readers should be aware of?

We’re in the studio a lot at the moment, working on a new album which we’re hoping to release over the summer. You’ll hear some of it on tour!

Got a few festivals lined up over the summer, like Hop Farm and Wood, and we’ll be announcing big UK shows when we get
back from Ireland.

How do you go about creating a new song?

I certainly haven’t developed any kind of formula as yet. I keep notebooks with me constantly and I make recordings of ideas, even in the most inappropriate environments!

First I write the guitar and vocals, and as the song comes together, I’ll play it to Matt, and who usually rattles out a bassline or drum part that takes the song in a completely new direction.

It’s amazing to see the songs develop from an acoustic platform. We’ve both found that writing for a full band has given us license to take the material in much edgier directions.

Have you any musical artists you aspire to be like?

The artists I admire most are the ones who can really lose themselves in a live performance.

Last year I saw TuneYards live at Scala. Regardless of sound, if I can bring even fraction of the energy she brings on stage during a gig, I will be a happy woman. She is definitely a hero of mine.

What about up and coming talent. Have you seen or heard anyone in the UK/Ireland that we at Fame (and our readers) should be keeping an eye on?

Tonnes, but I will mention one. A very good friend of mine Adam Cleaver will be breaking 99% of the world’s hearts in the next year or so with his beautiful music. Not a bad looking guy either!