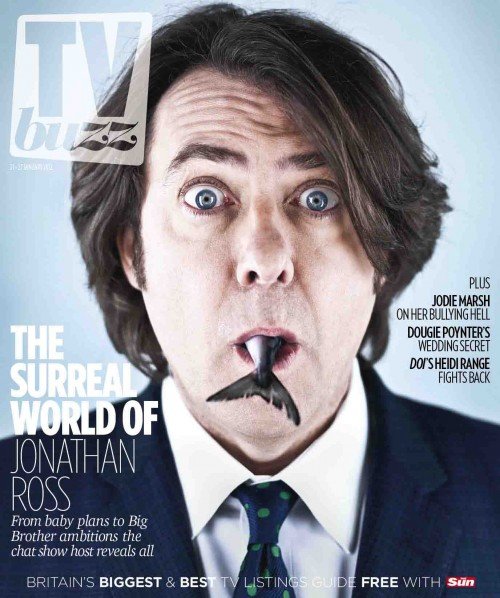 Jonathan Ross explained to TV buzz magazine from the SUN, how baby number four could be on the cards: “We’re been talking about having another kid.”

He told TV buzz, “The man has it fairly easy during the pregnancy. We just have to feign interest in morning sickness and baby names for a while, the fun begins for us when the baby comes out.”

Jonathan explained to TV buzz the truth behind the Lady Gaga rumours: “I love Gaga, I should point out though that I didn’t have a teeny weeny erection, I think the thing is that I’m so virile that even when I’m not erect people think I am a little bit!”

Jonathan is known to be quite a flirt: “I don’t think I flirt that much anymore, really. I don’t want to get off with anyone. Even when Gok Wan was flirting with me on Alan Carr’s New Year’s Eve show – I’m not really interested now.”

He continued, “I was well P***ed that night, I have no memory.” Ross revealed to TV buzz, “I like reality TV. The only reason I won’t go in the Big Brother house is because Jane [his wife] wouldn’t let me.”

Jonathan and Russell Brand have always been partners in crime, and he is supporting Russell through the split from Katy Perry: “He’s just a little sad behind the eyes right now, but anyone would be sad going through that, we had a long talk about it before it happened and we’ve had a fairly long talk since.”

But Jonathan’s main concern is whether to prepare an acceptance speech for this week’s National Television Awards!

“If I’m honest, I don’t think we’ll win, and if we don’t, I’d really like it to go to Loose Women – it’s a really good, slick show and they’re great company. But maybe I should think of something to say.” Always worth preparing something just in case!
#RossinTVbuzz
Read more in TV Buzz Magazine from The SUN
facebook.com/TVbuzzmag