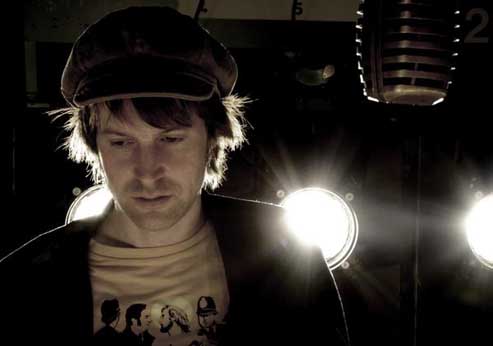 Jon Allen has had a very successful career to date, supporting Damien Rice, KT Tunstall, Jose Gonzalez and more recently Mark Knopfler and Emmylou Harris at the Wembley Arena, Manchester MEN and The Zenith in Paris. Jon also appeared on Jools Holland earlier this month. His new album â€˜Dead Mans Suitâ€™ is due for release on the 1st June. Jon will be going on a UK tour in support of the album, stopping off in Auntie Annies on Sunday 5th July.
Check out Jon Allen on Jools Holland

IN HIS OWN WORDS:
I was born in the rural serenity of Winchester and raised by wolves in a meadow among the blue bells. (Well the Winchester bit is true.) I must have been about six when I moved with my family from Winchester to Totnes, South Devon where I spent the rest of my childhood. I was pretty young when I started having piano lessons and singing in a choir. I even started to learn the violin. I had one lesson. It was disastrous. I am left-handed and they made me play right-handed (I could have been a contender!)

The secondary school I went to was very different from most. It was an alternative, progressive school called Sands. I started there when the school had just opened. I think there were about 25 pupils. In the beginning we had lessons at one of the children’s parents houses and we used to go to another parents house for lunch where they had a drum kit that I would play with chopsticks at lunch times.

I started playing the drums in jam sessions at school. No one ever wanted to be the singer it was too embarrassing. Being a natural show off and a clown I grabbed the mike and started crooning an Elvis impersonation. From then on I took to the idea of singing in a band.

Another pivotal turning point on my road to rock n’ roll was the decision I made to trade my games console for an electric guitar and a fifteen watt guitar amp. For about a year I played a right-handed model upside down. The first song I leant to play was ‘I’m the king of the swinger’. It was when I tried to learn the Beatles song ‘I’ve got a feeling’ from the ‘Let it Be’ album and couldn’t reach round the neck to play one particular chord that I decided to get a left handed model and learn the other way round.

I was sixteen when I wrote my first song. At about the same time I joined a local covers band, as a singer/guitarist.

The first music that really captured my imagination was The Beatles. At a friend’s house I found a copy of Sgt. Peppers on cassette. After I’d stretched that tape playing it constantly I went in search of the rest of The Beatles back catalogue. From there my interest spun off onto Led Zeppelin, then onto singer songwriters like Dylan, Neil young and Tom Waits. My parents bought me a 4 track recorder for my birthday one year and that really turned my interest on to the way that songs and arrangements were constructed, and the way the different instruments interact with eachother. I started experimenting with recording myself, layering vocal harmonies and generally exploring the multi-track recording process.

When I finished college I thought it would be a good idea to get out of Devon. It had become a claustrophobically sleepy place and I wanted to be somewhere where there were other musicians and some kind of scene. I applied for and got a place on a degree course at The Liverpool Institute of Performing Arts. During my time there I became a stronger and more focused songwriter. In my third year at LIPA one of my demos received a five star review in a magazine called ‘Making Music’. From that I got some offers of London Management so the decision to move there after graduation seemed natural.

Since I’ve been living in London I have played several support gigs for Damien Rice, KT Tunstall and Jose Gonzalez among others. Fans of my music within the industry include Coldplay producer Ken Nelson and Guy Chambers. Recently I have supported Mark Knopfler and Emmylou Harris at Wembley Arena, Manchester MEN and The Zenith in Paris. Also Mark Knapfler has very kindly offered to play guitar on one of my tracks called Sarah. If I were to try to describe my music or my sound I would say ‘Green’ (joke) Seriously, I guess I have a soulful, slightly gravely voice and I’m into roots, blues and folk music. – Jon Allen
www.myspace.com/jonallenmusic / www.jon-allen.co.uk