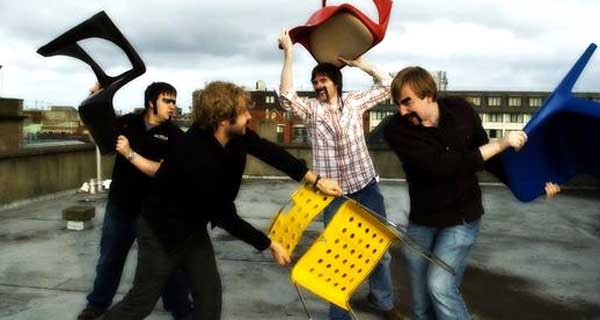 John, Shelly & The Creatures made a significant move in their musical career when they released their single â€˜ANGELINEâ€™ to receive critical acclaim and radio support from BBC Radio 1, BBC Radio Ulster, U105fm, Phantom Fm and many more. Following in the footsteps of many great bands, they then signed a publishing deal with Big Life Music Ltd (Snow Patrol, The Verve, Badly Drawn Boyâ€¦).

Where their single “Long May You Reign” was featured in the Discover Northern Ireland TV, radio and cinema advert campaign. (A very extensive campaign covering The Republic of Ireland and the UK will see the band continue to be featured on TV adverts across: RTE, TV3, UTV, Channel 4, E4, MTV, Sky One, Sky Sports, Sky News, Setanta and throughout Cinemas and Radio waves Nationwide).

John, Shelly and the Creatures debut album ‘Dinosaur’ will be launched in Auntie Annies on Thursday the 4th March, tickets are Â£4 and are available in Katy Daly’s and Auntie Annies bar.

They are influenced by a wide variety of genres and are unafraid to mix things up when it comes to recording and playing live. They have spent the last few months in the studio recording their stunning debut album â€œDinosaurâ€ which has a release date set for March 5th 2010.

With a successful showcase band tour in 2009 all over Ireland and Northern Ireland, John, Shelly and The Creatures also landed themselves on the bill for the IMRO Show case tour and a performed their own sell out show in Dublinâ€™s legendary venue: Whelanâ€™s. They have played with Irish luminaries such as Mundy & Dave Geraghty whilst on the road and closed the Tall Ships Festival in Belfast late last year.

They also won “Best New Irish Act” at the Balcony TV awards in 09. State Magazine have just recently hailed them as â€œones to watch for 2010â€ and they have just been added to the RTE Radio 1 playlist, a very huge and also rare honour for an unsigned act. Their live show has become one of their strongest word of mouth endorsements and is truly a visual and audio feast to behold.