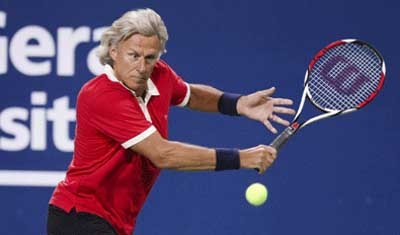 Odyssey Arena will be serving up a treat for all tennis fans in February when the masters of the game compete in Tennis Legends 2008!
Former Wimbledon champions John McEnroe and Bjorn Borg and French genius Henri Leconte are the first players to be confirmed. The trio will be amongst eight past champions competing in the international tournament which is part of the BlackRock Tour of Champions.

This will be Bjorn Borg’s first visit to Belfast. The Five-time Wimbledon Champion, is best known for his legendary tie-break game with McEnroe when they met at the 1980 Wimbledon final.

Speaking about their famed rivalry, he said: “John and I are two very different personalities – I’m a quiet Swedish guy and he is a more outspoken man from New York. We played some great matches and helped tennis grow to a different level – everyone remembers our matches. It will be nice to play him again. It’s always a special feeling to see him across the net.”

Tennis Legends 2007 tournament proved to be a real crowd pleaser with 20,000 people from across the country attending to see their favorite tennis stars. The keenly contested tournament was won by Sweden’s Anders Jarryd and it is hoped Jarryd will be back to defend his title in 2008.