With their new album â€œInventedâ€ due to hit the shelves this September, Jimmy Eat World have confirmed two Irish dates in November on Wednesday 17th at Mandela Hall, Belfast and Thursday 18th at Tripod, Dublin. 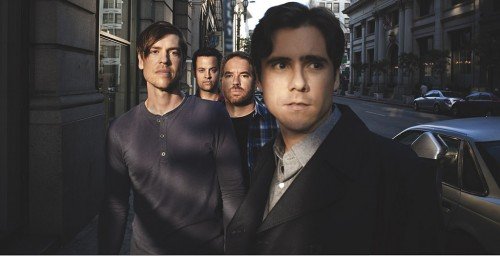 Jimmy Eat World recorded their latest record Invented in Tempe, Arizona at their Unit 2 studio, where they reunited with Mark Trombino, the producer on the band’s breakthrough album, Bleed American, and their seminal earlier albums, Static Prevails and Clarity.

“We’re very excited about Invented,” said lead singer and guitarist Jim Adkins, “it was great reconnecting and creating an album with Mark Trombino, we can’t wait for our fans to hear it.”

Fans will get their first taste of Invented when the first single “My Best Theory” hits the airwaves in August. Jimmy Eat World has a stellar history across Modern Rock radio with five top 10 hits.

Invented marks the band’s first studio album since 2007’s Chase This Light which landed Jimmy Eat World’s highest chart position of their career at #5 on the Billboard 200 Album Chart.

Jimmy Eat World’s last release may have been three years ago but they’ve been busy. The boys took a break from the recording of Invented to commemorate the 10-year anniversary of their influential album, Clarity with a sold out national tour.