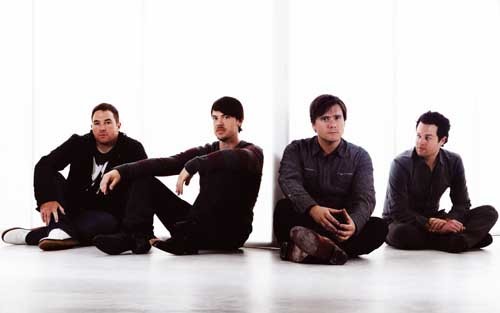 The public has two different perceptions of Jimmy Eat World. One is the band known for the classic pop single “The Middle” — the ubiquitous summer smash hit of 2002 and that propelled the 2001 album “Jimmy Eat World” (originally titled “Bleed American”) to multi-platinum status, as years of slogging it out under the radar were finally rewarded with sold out tours, an appearance on Saturday Night Live, an MTV Video Award nomination, invitations to tour with Green Day, Weezer and Blink-182, and critical acclaim on year-end lists from Spin, Rolling Stone, USA Today, Blender and Alternative Press among others.

The other is a band who made it the hard way and continues to do so: paying their dues, toiling for years outside the mainstream, releasing records on indie labels, building a dedicated fan base through incessant touring and by crafting albums like 1996’s formative “Static Prevails,” 1999’s “Clarity,” a pioneering record that resonated immediately with young listeners who wanted (read: needed) a little substance with their rock and roll, and 2004’s “Futures,” which featured the irresistible singles “Pain” and “Work” and marked the band’s second taste of gold sales and year-end best lists.

The pressure of successfully reconciling two such disparate images, making music that appeals to both constituents, has made lesser bands implode. Jimmy Eat World however has risen to the challenge, and for its new album “Chase This Light” the band regrouped in its native Arizona, built a home studio and methodically crafted the most emotionally and sonically expansive record of its 13-year career.

“Our goal,” says singer, guitarist and principal songwriter Jim Adkins, “has always been to get songs to a place that is accessible without being insulting.”

Straight away, from the opening riff of the first track and single “Big Casino,” the listener can tell this is a record that exudes confidence. Bold, crunchy modern rock riffs sit alongside clear vocals with direct first-person lyrics. It’s a skillful and fearless band that can successfully combine soaring guitar solos and textured feedback with call-and-response vocals, sing-a-long choruses and hand claps. The result is an album that seamlessly combines deep, heartfelt expression with the razor sharp hooks that have always been the band’s stock in trade.

Taken together, the eleven songs on this record form Jimmy Eat World’s most stylistically varied, musically ambitious and lyrically bravest effort. Highlights include the irresistible anthem “Electable (Give It Up),” “Carry You” (cited as a highlight of their recent warm-up tour), sure to be future live staples “Let It Happen” and “Always Be” and the haunting ballad-and perhaps most striking song on the album, “Gotta Be Somebody Blues,” described by Adkins as “the creepiest thing we have ever done.” The result is the proudest moment of the Jimmy Eat World catalog.

“It feels great,” Adkins concludes. “We have the album and we have the studio we made it with. Whatever happens in the future, we will always be able to make records on our own without compromise.”
myspace.com/jimmyeatworld

Tickets go on sale tomorrow, Friday 2nd November at 9am from Virgin & all usual Ticketmaster outlets.