Brawn GP secured the 2009 FIA Formula One Constructors’ Championship at the Brazilian Grand Prix in Interlagos with Jenson Button driving a superb race from 14th position on the grid to a fifth place finish to wrap up the Drivers’ Championship with one race of the season to go.

Team-mate Rubens Barrichello started his home race from pole position after an excellent performance in Saturday’s rain-delayed qualifying session but finished in eighth position after a late puncture forced an unscheduled trip to the pits and dropped him back to eighth place. 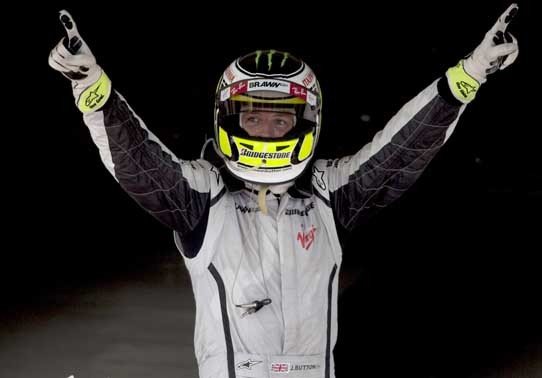 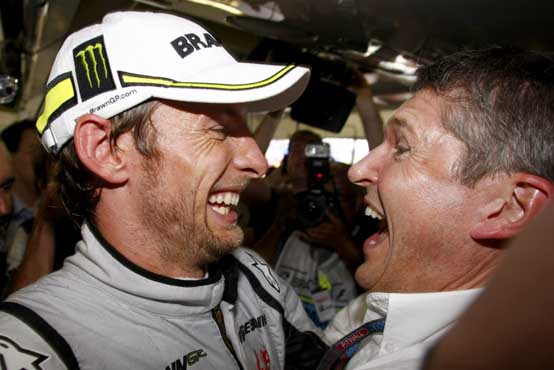 JENSON BUTTON
“Today was the best race that I’ve driven in my career and I’m really going to enjoy this moment. For the team to win the Constructors’ and the Drivers Championships here is just fantastic and they deserve it so very much after all the difficult times that we all went through over the winter.

This season has been a rollercoaster ride from the elation of the wins at the start to the hard graft in the second half of the season which has seen us grind out the results needed to take the titles. We have to say a huge thank you to Norbert Haug and Mercedes-Benz High Performance Engines for all of the support that they have given us over the year.

Without their commitment and faith in the team, and the fantastic engine that they have provided, we would not have been able to achieve the success that we have today. The list of people that I have to thank personally is too long to mention but they all know who they are and how much their support has meant to me over the years.

To everyone back at the factory in Brackley, thank you for all of your hard work and for producing such a fantastic car. It’s going to take a while to sink in but for now I’m just reveling in the achievement of a lifelong dream. It’s going to be one hell of a party tonight!” 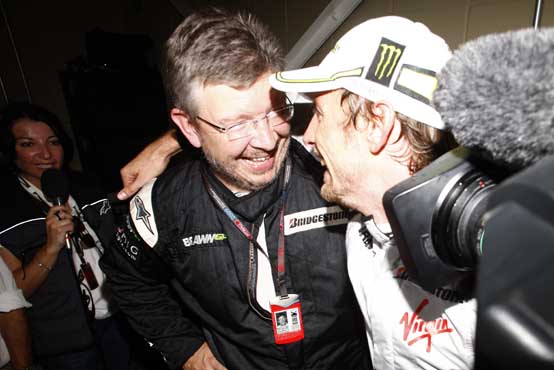 RUBENS BARRICHELLO
“Whilst I am obviously disappointed with the result today, I have to be pleased with our year at Brawn GP. We really have a great car and a great team and it has truly been an amazing year when you consider the situation that we were in just before the start of the season.

I’m truly pleased for Jenson as a friend and he is a great champion. We have a fantastic relationship working together and that has really shown through this year. Well done to him. It was a true fight and I fought really hard but he really won it in the first half of the season.

The team have been superb this year and they thoroughly deserve to win both the Constructors’ and Drivers’ Championships today. We’re going to have a great night together and I’m pleased to have played my part in securing the Constructors’ title for the team.” 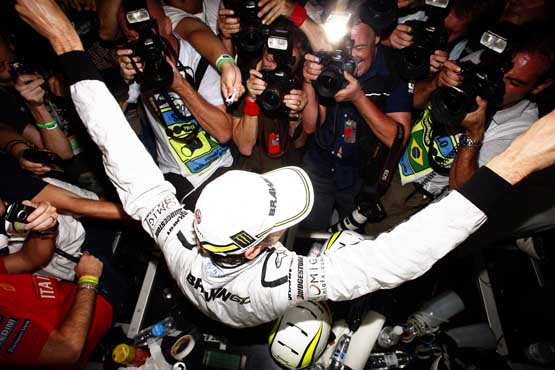 ROSS BRAWN
“What a day! I am so incredibly proud of the team and our drivers and it’s so very special to have won the Constructors’ and the Drivers’ Championships in our first year as Brawn GP. The second half of the year has been tough after such a successful start but getting the results in the difficult times is what counts in a Championship season.

It’s really going to take a while for what we have achieved today to sink in. Jenson is a fantastic racer and he had a great race today, particularly after such a difficult qualifying yesterday. He knew what he had to do and did just that and is a very deserving World Champion. Rubens has made a fantastic contribution to this season without which we could not have won the Constructors’ Championship today. The spirit in which our two drivers have fought for the Championship makes me very proud.

They have been a credit to the team and our sport. The work and the commitment that the team showed over the winter and throughout this season really has been sensational. We would like to take this opportunity to say our thanks to Mercedes-Benz who have been a fantastic partner for our team and have integrated incredibly well this season.

Their contribution to our success, and the support of McLaren gave us over the winter and at beginning of season, has enabled us to be in the position that we are in today. I hope that everyone at the factory in Brackley and at Mercedes-Benz High Performance Engines in Brackley, is very proud of what we have achieved today.

I also want to thank everyone who has worked with the team over the years that couldn’t be with us this season as we had to resize the team at the start of the season. My sincere thanks go out to them because they worked so hard and should feel a part of our success.”
www.jensonbutton.com