Jay-Z, U2 and Rihanna got together in London to perform “Stranded (Haiti Mon Amour)” in front of an audience as part of the “Hope for Haiti Now: A Global Benefit for Earthquake Relief” telethon.

The mid-tempo track featured guitar by The Edge and messages of hope from Jay-Z, Rihanna and Bono. Along with Madonna’s “Like a Prayer” and Wyclef Jean’s finale, it was one of the most upbeat performance of the night.

“My Port-au-Princes and Haitians gods/ All my princesses/ Our condolences as we fight against this,” Jay rapped to open the record. “We right by your side/ While we trying to make sense of this/ Heavenly Father/ Help us see through these problems/ For those that’s left/ Welcome them into your garden. 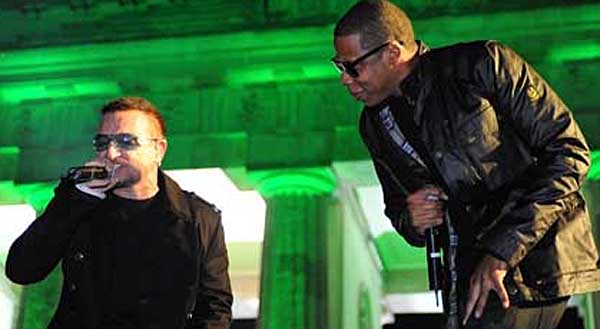 “Let’s get involved with ’em,” Jay added in the first verse. “Hand in hand with ’em/ Arm and arm with ’em/ Till they get strong again.”

“When the sky falls and the earth quakes/ We gonna put this back together/ We won’t break,” the rap icon promised with a melodic delivery.

In the second verse, Jay touched on Hurricane Katrina: “We learned from the past/ New Orleans was flooded/ So we know we just can’t rely on the government.”

Rihanna and Bono both lent their vocals to the hook.

“Not gonna leave you stranded, alone,” they continued.

The in-studio version of “Stranded (Haiti Mon Amour)” will be available via iTunes on a special album of live performances from the “Hope for Haiti Now” telethon. Just like the telethon, relief organizations that will benefit from the special album include Partners in Health, Oxfam America, the Red Cross, UNICEF, YÃ©le Haiti Foundation, United Nations World Food Program and the Clinton Bush Haiti Fund. All the proceeds will go toward Haiti earthquake relief.

Learn more about what you can do to help with earthquake-relief efforts in Haiti, and for more information, see Think MTV. Visit HopeForHaitiNow.org or call (877) 99-HAITI to make a donation now.

Apple, the record labels and the artists will donate their share of the proceeds to Haiti relief funds managed by “Hope for Haiti Now” charities, including the Red Cross and Wyclef’s Yele Haiti foundation. Performances will also be available for purchase in the days following the event through Amazon’s MP3 service and Rhapsody, through distribution provided by INgrooves.
MTV