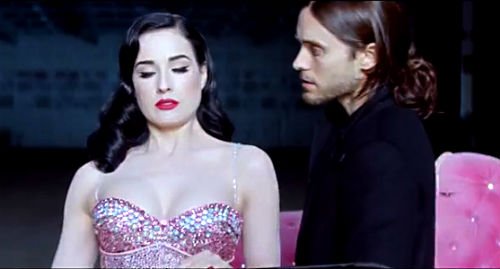 THE WAIT IS FINALLY OVER -‘UP IN THE AIR ‘VIDEO BY THIRTY SECONDS TO MARS IS UNVEILED: starring burlesque superstar Dita Von Teese!

Their new album was written and recorded around the world from Europe, to India, to the band’s studio in California, and was produced by Jared Leto and with Steve Lillywhite (U2, The Rolling Stones, Peter Gabriel) co- producing four tracks.

On the new album Jared says: “this is more than an evolution, it’s a brand new beginning. Creatively, we’ve gone to an entirely new place, which is exciting, unexpected, and incredibly inspiring.”