Friday 10TH October sees Jape play his first gig at The Stiff Kitten fresh from his superb performance before The Flaming Lips at Belsonic as well as a string of notable European dates this summer.
Jape’s music is primarily of the folky singer/songwriter mold, with alternative rock and electronic overtones, and comparisons have been made between Jape and both Beck (a noted influence) and David Kitt, with whom Jape collaborated to produce the 2004 single “Floating.” 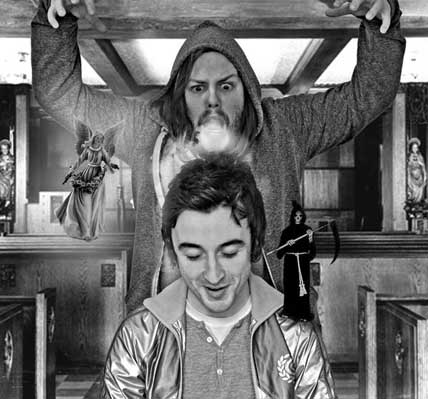 â€œIt was f….nâ€™â€¦ pretty mental!â€™ beams Richie Egan, Dublin resident and sole proprietor of the Jape alter ego, referring to a turn of events he will doubtless be asked about a lot over the coming months. â€œWatching Jack White playing the riff in this massive arena in Dublin, with all these people thinking, â€˜Who the f…k is Jape?â€™ and me going, â€œThatâ€™s me, mother…..s!â€A gorgeously stoned, slacker-pop nugget â€˜Floatingâ€™ may be (already immortal opening couplet: â€œWe took our first pill when the music was shit/I said, â€˜F..k dancing all night,’ and then thatâ€™s just what we didâ€),and one that perfectly illustrates its creatorâ€™s love of both melody and modern, mechanical beat-laden production, but there is more to the Jape story than just one song .

Ritual, released earlier this year, is Richieâ€™s most accomplished work to date, and showcases his maturity as a songwriter, and finds him living up to the promise of his previous work. 2008 is already looking like a very exciting year for Jape, with live shows dotted across Europe, including a stunning performance alongside The Flaming Lips at Belsonic in Belfast.