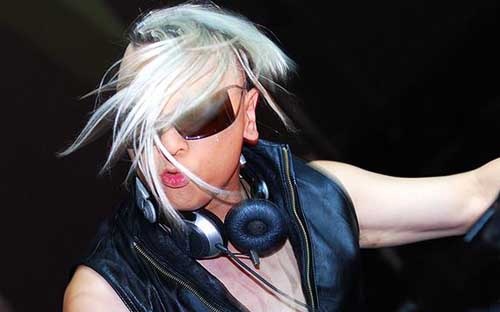 In an age when electronic music rules the airwaves and DJs are aplenty it takes something special to stand out from the competition.

Step forward YOJI! The Japanese superstar previously known as Yoji Biomehanika is as unique and individual as anyone in any walk of life – his uncompromising fashion sense as hard and diverse as his music.

The hard/tech dance artist is a living legend in his home country; his GIGA residency in Tokyo being the leading club night in Japan for over six years and YOJI has obtained rock star status amongst the country’s densely populated neon-lit cities.

But the impact of this extraordinary DJ has been felt right across the globe as his ability to fuse together some of the most groundbreaking and futuristic sounds in electronic music strikes accord with revellers in every corner of the world.

His sets are wholly unique, bringing together different elements from a range of genres and backgrounds to produce truly mesmerizing performances whether it be in clubs across Europe and Asia or festivals on either side of the Atlantic.

On the production front YOJI has worked with some of the industry’s leading producers including international heroes Ferry Corsten, Scot Project and Mauro Picotto to name but three.

His record label, Hellhouse Recordings, is renowned for releasing the freshest sounds in harder edged music and with remix and mix album requests flooding in the talismatic spinner is as busy in the studio as he is on the club circuit.

Now YOJI returns to one of his favourite destinations as Planetlove WKD host the Japanese heavyweight for a Planetlove Ireland Pre-party Tour of Northern Ireland on the May Day bank holiday weekend!

As both events are official pre-parties to the Planetlove Ireland festival at Fairyhouse Racecourse, County Meath, on Saturday 6th June festival tickets are up for grabs on both nights. See planetlovemusic.com for more details.