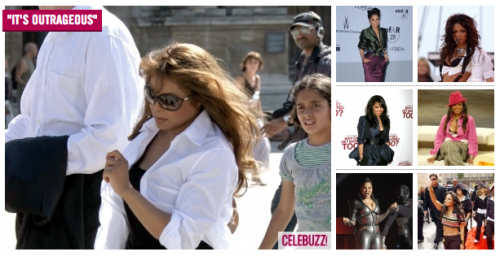 In excerpts from Randall Sullivan‘s upcoming book, Untouchable: The Strange Life and Tragic Death of Michael Jackson — and published in the esteemed Condé Nast magazine — it was alleged that Janet, 46, had delayed her sibling’s funeral over money owed relating to the burial plot deposit.

“The article states that, according to Untouchable, Ms Jackson put down a $40,000 deposit to secure a burial plot for Michael Jackson but refused to let the funeral take place until that money was repaid. This is untrue,” Janet’s attorney Blair G. Brown wrote in the letter sent on October 5 and obtained by Celebuzz.

“Ms. Jackson never delayed the funeral in anyway. In fact, she paid for the funeral and was reimbursed for some of those expenses by Michael Jackson’s estate in the year after the services took place.”

Jackson, via her lawyer, added: “In addition, there were other private costs associated with Michael Jackson’s passing that Ms. Jackson incurred and for which she has never sought reimbursement. To falsely accuse Ms. Jackson of holding up her brother’s funeral over money is outrageous. This story is particularly hurtful and distressing because of Ms. Jackson’s strong desire to serve her brother, whom she loved dearly, and he wish to stand with and support her family.

Brown said the damage to Jackson’s reputation was “exacerbated” because the article was republished by numerous media outlets around the world.

“I demand that Vanity Fair retract its statement that Ms. Jackson “refused” to let Michael Jackson’s funeral take place until the money she put down as a deposition on his burial plot was repaid,” the lawyer said.

“To the extend that this statement appears in excerpts of Untouchable published in Vanity Fair’s November 2012 issue, I demand that Vanity Fair publish a retraction explaining that the statement is false.”

Brown also claimed: “The article is replete with additional false and defamatory statement regarding Ms. Jackson.”
The King of Pop died on 25 June, 2009 after suffering a cardiac arrest brought on by an overdose of anesthetic Propofol. He was buried in a private funeral place in early September, 2009.
By Dylan Howard