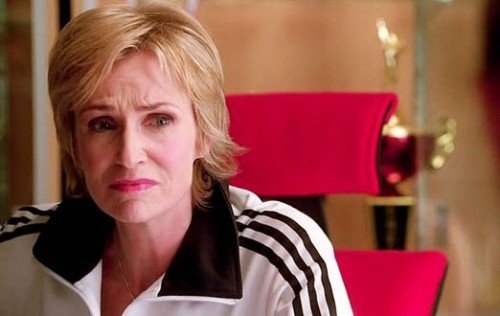 After last week’s controversial ‘Glee’ episode that featured a high-school shooting, Jane Lynch’s character Sue Sylvester is fired from McKinley High when she lies and claims that the guns used in the shooting belonged to her.

Now that Jane’s character is out of the high-school, does that mean Jane is off the show? Hollyscoop asked Jane herself to get to the bottom of it. “[On the show] I have been fired. I haven’t been written back in yet.

“I am in the show, but [my character] is teaching aerobics at 23 hour fitness, so that is where Sue Sylvester is right now, so we’ll see what happens,” Jane tells Hollyscoop at an event for belVita Breakfast Biscuits.

Are you coming back next season? “I think I will,” she tells us, “Well, we will see, I don’t know that.” We wouldn’t be surprised if Jane opted out of the show. She’s about to make her Broadway debut as Miss Hannigan in Annie, which runs for most of the summer. 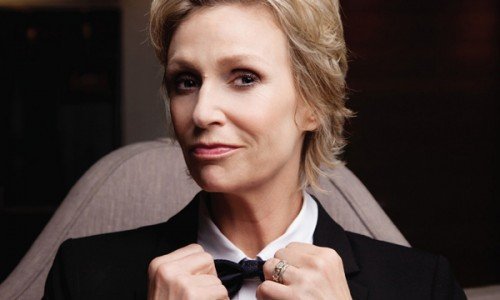 “I have never done a musical on Broadway,” Jane tells Hollyscoop’s Diana Madison about the role, “I haven’t really done many musicals I’m thrilled I am so excited.”

But back to Glee and who is or isn’t on the show. Cory Monteith recently checked into rehab and we wondered if Jane has communicated with him at all about it.

“I haven’t spoken to him but I have been sober for over 21 years and he and I talk about that all the time so he knows that I support him. He knows the drill and he knows what he has to do to be sober and stay sober. I commend him for doing this on his own and he got sober when he was 19, he was this really young guy.”

Jane’s all about healthy living now and has teamed up with breakfast bar belVita Breakfast Biscuits, which has been popular in the UK for years and has finally launched in the US. “It’s such a great thing for breakfast because its made with whole grains and releases it’s energy steadily all morning long,” Jane says.