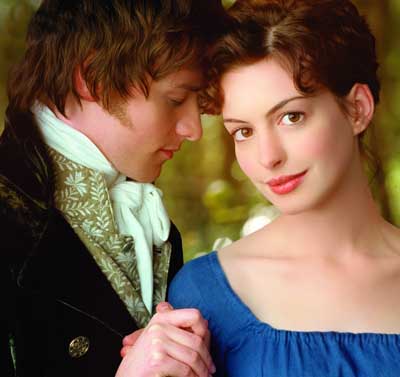 With a veritable feast of Jane Austen classics including the romantic drama Becoming Jane, featuring on the small and large screen in 2007, Bath Tourism Plus is launching a new campaign to highlight Austen’s connections with the city.

Running September 21st to the 30th 2007, the seventh Jane Austen festival will be launched with a colourful costumed parade through the city centre, now the biggest Regency costume promenade in Europe. The week-long programme includes talks and productions, readings and tours and draws Jane Austen fans from around the world and would be.

To celebrate the release of the BECOMING JANE dvd, The Bath Tourist Board has created a number of attractions for visitors and fans of Austen such as Tea with Mr Darcy, a number of talks at the Jane Austen Centre and a Jane Austen tour of the city.

BECOMING JANE is a poignant and enchanting story based on the life of a young Jane Austen. Tom Lefroy a cad and scandalous womaniser comes to visit family in Hampshire first infuriates Jane but she soon falls in love with his rebellious nature. Deemed a wholly unsuitable match by her parents who long for her to marry into money, Jane is tempted Tom’s suggestion to elope, leading to potentially catastrophic consequences. The young Jane must decide whether to follow her heart of her head and risk losing friends, family and fortune.

Jane Austen set two of her six published novels, Northanger Abbey completed in 1803 and Persuasion written in 1817, in Bath and made the city her home from 1801 to 1806.

Jane knew Bath as a thriving spa resort, popular with fashionable society. Bath attracts modern day’s visitors for all the same reasons, it is a vibrant city with great shopping, dining and plenty to see and do.

People watching is as much a sport today in Bath as it was in Jane Austen’s day and her intimate accounts of the place and the people it attracted make her novels as readable now as they were when they were first published.

In Northanger Abbey Jane writes:
‘They arrived in Bath. Catherine was all eager delight; – her eyes were here, there, everywhere, as they approached its fine and striking environs, and afterwards drove through those streets which conducted them to the hotel. She was come to be happy, and she felt happy already’.
visitbath.co.uk